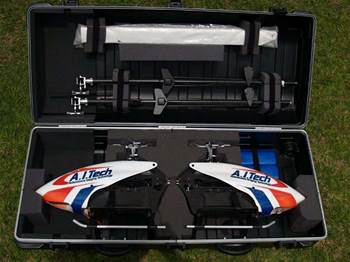 The company expects to trial UAVs to deliver spare parts, up to a weight of 30 kilograms, to remote sites "in the next three months or so".

"We have been asked to do a trial of the delivery of stuff to remote mining settlements and at sea to mining platforms, but that is at the extreme edge of the current capability envelope [for UAVs]," commercial director Mark Stevens says.

"We'll certainly do that in the next few months but I think it would be fair to say that's a developmental application of the technology rather than an existing capability."

The parts delivery proposal raised eyebrows when it was reported - and at least some of the more established players don't see it holding much weight, citing payload capability and civil aviation regulations as key roadblocks.

"People get so carried away with a UAV," A.I. Tech director Kevin Lunn says.

"Let's keep in mind the main [purpose of a] UAV is it's deployable from almost anywhere, and it's very fast and efficient.

"You don't need to have autonomous flight out to LNG plant and back. I don't see that as really being a viable option at this stage.

"I imagine you'll see that in commercial aircraft before you ever see it in private operations, where you'll actually have freighters flying freight around the world autonomously.

"You've got to [evaluate] how big do I need to be? Am I a UAV or better off moving into a full size aircraft? Because at the end of the day full sized aircraft really aren't that expensive."

Current civil aviation and safety regulations (CASRs) in Australia that govern the operation of unmanned aerial systems (UAS) date back to July 2002.

The Civil Aviation and Safety Authority (CASA) kicked off a high-priority project in July last year to review the decade-old rules in light of the significant ramp-up in activity around UAV use.

"The project objective is to provide more comprehensive guidance to Industry on the regulatory requirements and approval processes for commercial operation of UAS in Australia," CASA says.

"The guidance will consider the long term integration of UAS into normal aviation operations in all classes of airspace."

The revision of rules around UAVs is well understood by the sector's key players.

"You've got to keep in mind that CASA doesn't want every man and his dog out there flying UAVs in airspace they have no knowledge of whatsoever," A.I. Tech's Kevin Lunn says.

"Backyard modellers can go buy these things from hobby shops and fly them within a kilometre of Perth airport and no one's there to be able to look after it. That's why CASA are jumping on it from big heights at the moment.

"They want people like us doing what we do because we understand where full size aircraft are, and how the structure works in the general aviation industry."

"CASA has set the bar very high which we support, so we've similarly established an excessive level of governance, safety and administration, just so that they're comfortable with what we're doing," UAVs Australia's Mark Stevens says.

Cyber Technology's Joshua Portlock says his firm's chief UAV operator is a board member of CASA's committee for unmanned vehicles, "so he's got a good working relationship [with them]."

"[UAV] 'pilots' require general aviation knowledge in line with a private pilot's licence, and specific UA skills," CASA notes in a fact sheet. "Additional ratings include a flight radio operator's licence, and experience on the type of [UAV] operated."

Such regulation makes it less likely that miners will buy train onsite personnel to pilot UAVs. Rather they will buy those skills in on an as-needed basis, according to Adam Technology's Jason Birch.

"I think in the beginning we envisaged that mine sites would buy the UAV and operate it themselves, but I think with the new emphasis that CASA is placing on certifications, it's probably not realistic anymore for mine sites to do everything themselves," Birch says.

HELImetrex's Ray Gillinder concurs: "[Piloting UAVs] is a professional in their own field".

This article is part of a special investigation into the use of UAVs in Australian mines. Stay tuned to iTnews tomorrow for the final installment.