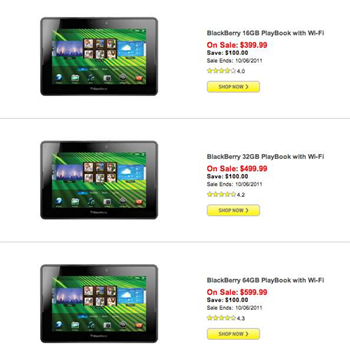 Major US retailers have started offering discounts up to US$200 on Research in Motion’s PlayBook tablet as the company aims to whittle down its inventory.

Office Depot had a similar deal to Staples, while Walmart has reportedly offered the largest discounts, according to The Boy Genius Report, with claims it was selling the entry level unit for $250.

The US discounts followed RIM’s admission that it had shipped just 200,000 of the devices last quarter and was planning a range of enterprise discounts and channel rebates to clear out its swollen inventory.

The discounts have not reached Australia yet, with retailer Harvey Norman still listing the 16GB PlayBook at the June launch price of A$579.

However, the US discounts were similar in size to those retailers began offering for the TouchPad, which were later expanded to Australia prior to its $99 firesale.

Analyst firm Gartner forecast RIM to sell three million PlayBooks in 2011, around five percent of the 64 million tablets expected to sell this year.