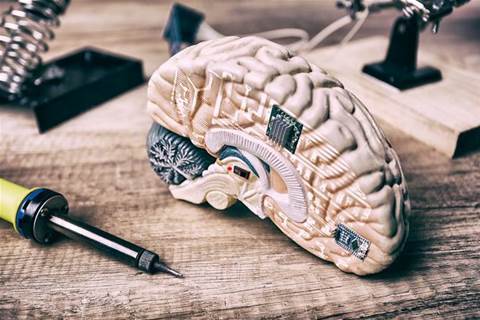 Two-way communication on the cards.

Engineering researchers at the University of NSW Sydney have been granted almost $500,000 by the US Navy to develop chips that enable ‘neural interfacing’, or direct communication between brains and machines.

The team has already developed what they call “optrodes” - pixel-like sensors on a chip that pick up the brain’s electrical signals.

“At the back of the chip are optical fibres that measure this brain activity and translate it into a visual image,” said Dr Leonardo Silvestri, an optical electronics expert working on the project.

“This is the information we can interpret and use to control a connected device, which could have potential applications in numerous fields.”

The team chose fibre optics over conventional wiring because light pulses have a higher bandwidth than electrical signals, and are less susceptible to external interference.

In May a Slovenian woman’s spasm-regulating brain implant was unexpectedly shut off when lightning struck her building and interfered with the device’s electronics.

The glass fibres are also thinner, sturdier, and less likely to corrode than metallic wiring.

The fibres lead from the brain to an external device which will then transmit data wirelessly computers for analysis and actioning.

The precision afforded by the small, robust and interference-free wires could be especially valuable for medical applications, said Silvestri.

Professor Francois Ladouceur, another team member, says the broad range of possible applications for neural interfacing could have a bigger impact on people’s lives than quantum computing.

While health care is an obvious field to benefit from these developments, other areas that could take advantage of collecting and understanding brain signals include workplace safety, ‘smart’ home or office environments, marketing research, authentication and security, and entertainment.

However, these possibilities are still a way off. Existing neural interfaces to control prosthetic limbs or reduce seizures are still far from perfect.

Chip designer ARM is working on a separate neural interfacing project with the University of Washington to battle paralysis and degenerative disorders.

“We still need to address challenges in scalability – by developing a denser chip that is capable of transmitting sufficient electrical signals from the brain to make it possible to accurately control a machine,” Ladouceur said.

“We also need to ensure biocompatibility – which means ensuring there will be no adverse effects when implanted into humans.

“But these are perfect engineering challenges, which we will overcome.”