US Customs gives BlackBerry another shot 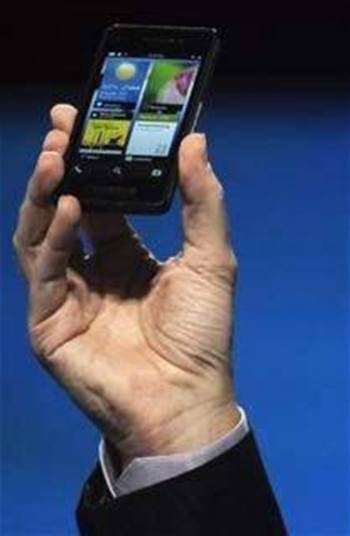 Research in Motion Chief Executive Officer Thorsten Heins holds up a prototype of the BlackBerry 10 smartphone at the BlackBerry World event in Orlando May 1, 2012. Credit: Reuters/David Manning

Not just an iPhone house?

A US federal agency that recently ditched Research In Motion's BlackBerry in favour of the iPhone confirmed on Thursday it will trial RIM's new BB10 smartphones, fuelling a fresh spurt in the Canadian company's share price ahead of the launch of the new devices.

Immigration and Customs Enforcement (ICE), an investigative arm of the US Department of Homeland Security, will early next year begin a pilot program to test the new devices and RIM's software that will allow it to manage mobile devices on its network, RIM told Reuters late on Wednesday.

The news sent the shares up more than 5 percent on Thursday afternoon. It came a day after RIM's shares rallied to their highest close in seven months as the make-or-break BB10 line appears to be gaining some traction with RIM's bread-and-butter customers in the weeks before its January 30 launch.

RIM, a one-time pioneer in the smartphone industry, has lost market share in recent years to Apple's iPhone and devices powered by Google's market-leading Android operating system even among the business audience who once used BlackBerry devices almost exclusively.

RIM aims to persuade both corporations and government users to stick with its smartphones, long valued for their strong security features.

It promises the new line, powered by the BlackBerry 10 operating system, will perform more smoothly and with more speed than previous BlackBerry phones.

RIM's success though may well depend on the response from enterprise customers, many of whom have recently begun to flee to rival platforms.

ICE is one such example. The agency in October announced plans to end a long relationship with RIM, saying that its now aging line-up of BlackBerry devices could "no longer meet the mobile technology needs of the agency." At the time, ICE said it would buy iPhones for about 17,600 employees.

A spokeswoman for the agency said on Thursday ICE is not backing away from either Apple or RIM.

"Given the nature of a rapidly evolving marketplace for mobile computing and the rising expectations of our users ... the pilot with RIM is a prudent technology management practice," said Barbara Gonzalez, the agency's press secretary.

Gonzalez said the agency is developing mobile applications for law enforcement and it is looking into how BlackBerry 10 may be able to provide mobility solutions in the future.

Last month, RIM said it had won a much-coveted US government security clearance for its BlackBerry 10 devices and its new enterprise management platform.

The company said it was the first time a BlackBerry product had won Federal Information Processing Standard (FIPS) 140-2 certification ahead of launch.

The certification, from the National Institute of Standards and Technology, is one of the minimum criteria for products used by US government agencies and other regulated industries that store, transfer, share and disseminate sensitive information.

The stamp of approval gives many of RIM's security-conscious enterprise clients confidence that data on smartphones running BlackBerry 10 can be properly secured and encrypted.

RIM, which has begun beta testing BES 10 with a handful of its key enterprise customers, said ICE will be one of the first government organizations to pilot the BlackBerry 10 devices.