Calls for US government to act on loss of trust.

In the report [PDF], the Information Technology and Innovation foundation (ITIF) said if non-American companies decided the risks of storing data with US firms outweighed the benfits, the collection of electronic data from third-paties "will likely have immediate and lasting impact on the competitiveness on the US cloud computing industry".

A significant amount of revenue is at stake for US companies, the ITIF estimated.

At the low end, US cloud computing providers could lose US$21.5 billion (A$24 billion) in revenue over the next thre years; that estimate is based on a modest ten per cent loss of the overseas market to European and Asian competitors.

Should the worst-case scenario come true with a fifth loss of market foreign market share while retaining its current domestic customer base, US cloud providers stand to shed US$35 billion (A$39.2 billion) by 2016 the ITIF said.

Overseas competitors have been quick to exploit the PRISM scandal which continues to grow as the fugitive Edward Snowden releases further material. Their US counterparts such as Amazon, Rackspace and Microsoft have until now dominated the cloud computing and storage market.

ITIF noted that the largest hosting company in Switzerland, Artmotion, grew revenue by 45 per cent in the month after the PRISM story broke.

“If European cloud customers cannot trust the United States government, then maybe they won't trust US cloud providers either.

"If I am right, there are multibillion-euro consequences for American companies. If I were an American cloud provider, I would be quite frustrated with my government right now,” the European Commissioner for digital matters commented on PRISM revelations last month.

Bearing out the ITIF findings, the Cloud Security Alliance surveyed its worldwide membership in June to July this year on the consequences of the PRISM revelations and found that of its 207 non-US respondents, 56 per cent said they would be less likely to use US-based cloud providers. 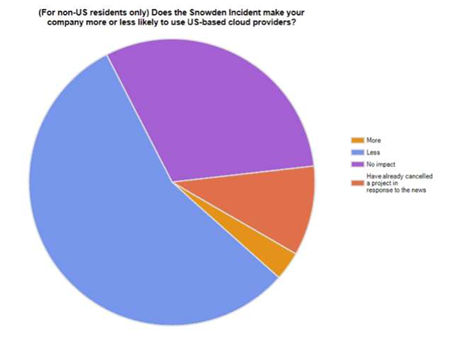 A further ten per cent of CSA survey respondents said they had cancelled projects with US based cloud providers.

Ironically, data stored in the United States is generally better protected than in most European countries, despite the PATRIOT Act that enabled the NSA surveillance, the ITIF said. German intelligence services can monitor telecommunications without a court order lawfully, the think tank noted.

In order to mitigate the risk to the competitiveness of the US cloud computing industry, the ITIF proposed the American government set the record straight on which information it had access to - and which it didn't.

The think tank said that more information about PRISM needed to be declassified so that the economic consequences of national security decisions could be debated.

Furthermore, it said the US government had to establish international transparency requirements and weave these into trade agreements such as the Transatlantic Trade and Investment Partnership that is currently being negotiated with the European Union.