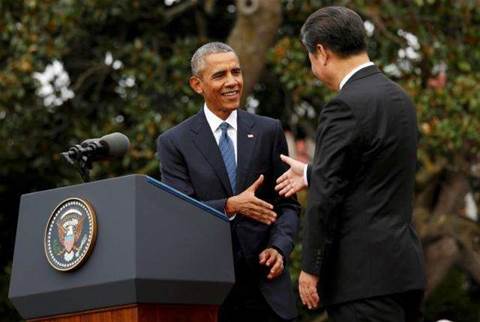 US President Barack Obama and Chinese President Xi Jingping said they had reached a "common understanding" on curbing economic cyber espionage, but Obama remained wary and said he would impose sanctions on Chinese hackers who persist with cyber crimes.

Speaking after White House talks during Xi's first US state visit, Obama quickly homed in on the thorniest dispute between the world's two biggest economies - growing US complaints about Chinese hacking of government and corporate databases, and the suspicion in Washington that Beijing is sometimes behind it.

"It has to stop," Obama told reporters, with Xi standing beside him. Obama said he and Xi made "significant progress" on cyber security.

But he added: "The question now is, are words followed by actions?" and made clear he was prepared to levy sanctions against cyber criminals.

The two leaders said they agreed that neither government would knowingly support cyber theft of corporate secrets or business information.

But the agreement stopped short of any promise to refrain from traditional government-to-government cyber spying for intelligence purposes.

That could include the massive hack of the federal government's personnel office this year that compromised the data of more than 20 million people. US officials have traced that back to China but have not said whether they believe the government was responsible.

Xi reiterated China's denial of any government role in the hacking of US corporate secrets and said the best way to address the problem was through bilateral cooperation and not to "politicise this issue."

"Confrontation and friction are not the right choice for both sides," he said. China has routinely insisted that it too is a victim of cyber hacking.