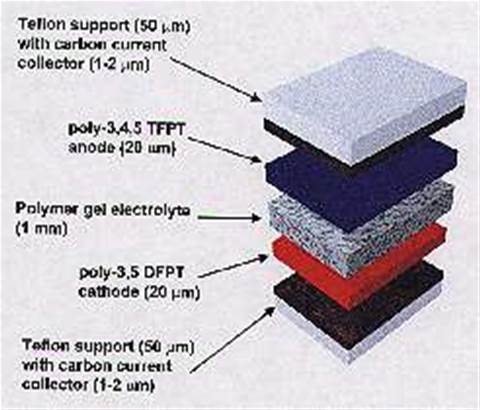 Researchers at Brown University in the US have created a prototype rechargeable battery that is as thin as a plastic transparency and as powerful as 100 alkaline batteries.

The plastic battery, created by engineers Tayhas Palmore and Hyun-Kon Song, has been described as a "hybrid" that delivers the energy output of an electrical capacitor with the longevity of an alkaline battery.

Traditional alkaline batteries use electrical current generated from a chemical reaction within the battery to generate a small amount of energy for a long period of time.

Electric capacitors use a pair of oppositely charged plates to store a large amount of energy for a short period of time.

Palmore and Song's plastic battery allows for the power of a capacitor and the extended output of an alkaline battery.

The key component is a chemical compound called polypyrrole which conducts electrical current.

Song and Palmore applied the polypyrrole to a pair of gold-coated plastic strips that were then given opposite charges and stuck together, separated by a thin membrane to prevent a short-circuit.

The result is a super-thin plastic battery roughly 3.5in long that is rechargeable and extremely powerful.

One problem at this stage is that the battery tends to lose capacity with repeated charges. But if this can be overcome, the possible applications are numerous.

"You could wrap cellphones or electronic devices in it. You could even make fabric out of this composite," said Palmore.

Got a news tip for our journalists? Share it with us anonymously here.
Copyright ©v3.co.uk
Tags:
battery boffins build hardware paperthin plastic us