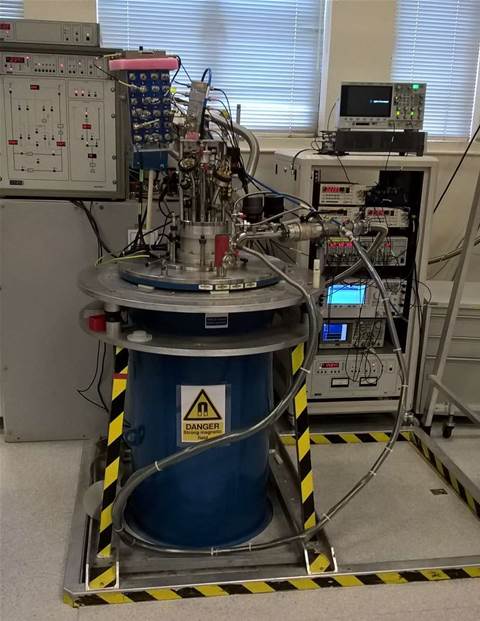 A cryogenic fridge at the new facility

The University of New South Wales has opened a new facility that will be used by the country's leading institution for quantum computing research.

The Centre for Quantum Computation and Communication Technology (CQC2T) combines the research efforts of 180 researchers from 17 coordinated programs across six universities and is led by UNSW professor Michelle Simmons.

The expanded laboratory complex, located at UNSW’s Kensington Campus, is double the size of CQC2T’s current facilities and will be used to house six new ultra-cold dilution refrigerators along with six new scanning tunnelling microscopes (STMs).

The STMs, which cost more than $1 million each, are used to precisely position images and manipulate individual silicon atoms by applying voltage to fine tungsten tips inside a vacuum equivalent to outer space, created using 7 kilovolt ion pumps that weigh around 120 kg each.

To minimise vibrational noise, each of the STMs will sit on a 1.2 metre deep concrete block weighing around 1.5 tonnes per square metre, coated with a 2 centimetre thick soft elastic layer.

The rooms for the STMs also have acoustic absorbing panels to reduce noise vibrations, along with an air conditioning system that keeps the room temperature stable while filtering any moisture or other impurities from the air.

Each of the 2 metre-tall fridges will be inserted into pits up to 2.8 metres deep, which have been reinforced with non-magnetic concrete.

The fridges will have strong superconducting magnets which have fields of up to 10 Tesla in strength, which is 250,000 times stronger than the Earth’s magnetic field.

During the launch event, Prime Minister Malcolm Turnbull described the facility as being up to 10 years ahead of any other facility in the world.

"We are here at the cutting-edge of the next stage of the digital era and that's why the work being done here by Michelle Simmons and her team is so vital to the success of our innovation agenda," Turnbull said.

"Right here, around us, is the world's leading research in the area. The memory time that's been achieved here is a million times more than has been achieved in other labs around the world.

"The use of silicon in the super-cold environment will enable a quantum computer to be built here that will be more than a theory but a reality. A truly super computer. A quantum computer with processing power hitherto unimaginable."

The CQC2T program has received significant government and private sector support, including $26 million in funding as part of the Turnbull government’s innovation policy, along with a further $10 million in cash and in-kind support from both Telstra and the Commonwealth Bank.