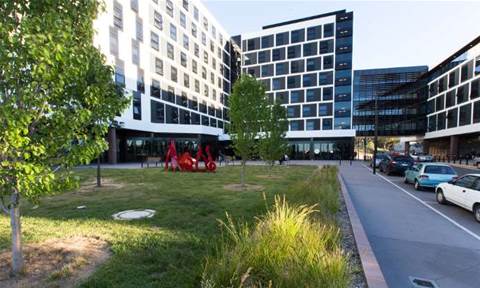 The University of Canberra has reached a major waypoint in its network overhaul, with new HP core switches and cross-campus fibre cables now in action.

Along with replacing the core switches in its main data centres, the three-stage network overhaul project included swapping out all the switches in its campus network and laying a fibre ring around the perimeter of the campus, to which the major buildings were connected to as a diverse path.

The network upgrade was the latest in a series of projects over the past five years which have sought to completely overhaul the university’s IT infrastructure.

It follows on from a 2013 effort that saw the University of Canberra replace both of its data centres, including building a new off-site facility from scratch.

‎University of Canberra technology deputy director Tom Townsend told iTnews the university’s network previously had a hub-and-spoke topology, which meant there was just a single line from the main data centre out to each of the buildings.

“The network is something that had been neglected for a long time, and while we hadn’t had any significant outages – thank goodness – we would have been quite at risk if, for example, there was damage to a core section of fibre or there was a fire at our main data centre,” Townsend said.

Making matters worse, much of the equipment that had previously been used by the University of Canberra was either obsolete or not fit-for-purpose.

“Our campus network had grown organically over the past decade or two, and we had a lot of non-enterprise-grade networking hardware. It was predominantly Netgear, with a smattering of other small brands,” Townsend said.

“Our ability to manage it as the switch count [reached 550] got quite limited. The centralised managed software that Netgear provides is virtually unusable in a network of that size, it’s really geared for organisations less than half our size."

The risks of major outages, combined with growing research demands for bandwidth, meant overhauling the network became a major priority for the university.

The university originally put out a tender to replace 550 switches in 30 buildings across campus. However, Townsend’s team soon found some efficiency gains could be made as the equipment was replaced.

“For this project – we have been able to reduce the number of switches by about 100, there are now closer to 450 switches and that number will continue to drop somewhat as we continue to roll out the new switches. The reduction is due to us replacing large numbers of smaller 24 port switches with new 48 port switches,” Townsend said.

“The big advantage is we now have true redundancy between our two cores. Previously we had a manual failover if one of our cores failed, and that was untested," Townsend said.

“We now have two cores that are clustered together into a virtual switch and we’ve tested failover between them.”

The university ran a parallel project to upgrade its fibre backbone, including laying fibre ring around the perimeter of the campus to give buildings a second fibre path back to each of the data centres.

“The network ring was a big deal from a topology perspective, because now every building can be simultaneously connected to both network cores at the same time,” Townsend said.

“So now when one of those physical lines gets cut between any building and the core, it automatically fails over to other core without any outage.

“Courtesy of construction on-campus earlier this year, we actually had a ‘live test’, and it worked, no one noticed there was a problem even though a backhoe went through an important fibre cable.”

The university was able to reuse almost all of its existing fibre.

“We upgraded to having a 80 gigabit backbone (dual 40 gigabit per second links) across campus and we now have two 10 gigabit links to our ISP, AARNet," Townsend said.

“That’s a big upgrade – previously we had a single 5 gigabit link to our ISP and we had a 20 gigabit backbone between the cores.”

Infrastructure upgrades, one step at a time

With the network cores replaced and the new fibre now in place, the only work that remains is to swap out the remaining old equipment on the campus network.

“We’re got 55 to 60 percent of the campus network cycled out, and we’re doing that slowly as we refit areas,” Townsend said.

“Once that’s done, the entire network will all be within a manageable lifespan.”

Townsend said some of his project's success had been a result of creating a series of smaller projects, rather than attempting to do everything at once.

"I think it’s working well for us. There have been no big issues, every issue has been manageable because they’ve been contained within manageable chunks,” Townsend said.

“We are in a tremendous position, from an underlying infrastructure point of view, it’s bought us a lot of confidence in our environment, and we’ve got an excellent reputation around campus for being rock-solid. That’s something we intend to continue to build on.