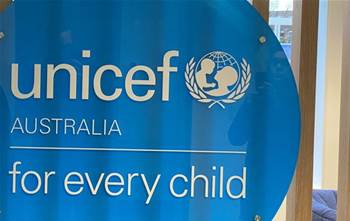 UNICEF Australia used digital transformation as the catalyst to change the way it raises funds to improve the lives of children, moving from four big appeals a year to an “always-on” fundraising approach.

In this week’s episode of the iTnews Podcast, chief operating officer Sarah Grattan unpacks UNICEF Australia’s IT and digital structure and strategy, as well as a continuing transformation effort that began not long after she joined the not-for-profit in May 2018.

UNICEF works to protect children in more than 190 countries and territories, funded entirely through donations. In Australia, UNICEF supports local and international programs through advocacy and fundraising.

For Grattan, it’s just part of being involved in the not-for-profit sector.

“When you’re a charity and relatively small - we're about 80 people here in Australia - you get to have a breadth of experiences, and you have to wear a lot of hats to be able to get things done, because we just do not have the budget and the scope to have specialists for all of these roles,” she said.

Three “small, lean” teams of three people each run much of the organisation’s IT, digital and data efforts, with the remainder of resourcing coming from technology partners.

There is a ‘technology, security and privacy’ team whose focus is “cost down and resilience”; a ‘business solutions’ team focused on CRM, business rules, analytics “and all of the connections to our service providers and our website”; and a third team that sits in the fundraising group that is focused on “the utilisation of insights and optimisation of customer data”.

Grattan said that within a short time of joining UNICEF Australia that it was clear the organisation’s processes could benefit from being streamlined.

“It took a really long time from when a supporter gave us a donation for that information to be processed, and a thank you and a receipt to be issued,” she said.

“The supporter experience really needed streamlining, but at the time, it was really held up by these ageing systems.”

One of the challenges was the existence of what she calls “pinball processes” - “a ping pong machine of manual data in-and-outs”.

Grattan said she spent a year on strategy development and procurement before sourcing a technology stack mostly from the Salesforce ecosystem.

She decided to “start fresh” where possible, redesigning processes to be simpler and cloud-native from the outset.

“We made that decision as an organisation: Let's not just try and replicate what we're already doing. If there was a better way of doing things, let us know, and we’ll build for the future,” she said.

Aside from a simpler, cloud-first technology stack and new processes, one of the key advantages of UNICEF Australia’s transformation is the establishment of a single donor or supporter ID, making it simpler to understand the relationship with that supporter.

Streamlining the experience for supporters was critical for UNICEF Australia as it changed the way it raised funds, shifting from big campaigns to an always-on digital-first approach.

“We've gone completely digital, because that's where most of our supporters are and that's how they want to interact with us,” Grattan said.

“In the ‘old world’, we were sort of forced into these artificial structures of focusing our communications on just four big appeals a year - big seasonal campaigns.

“We're really moving away from that now and we're making the communications trigger much more about a combination of supporter preference, and then we're continually testing and optimising that.”

Optimisation was required to ensure the supporter experience is always kept front-and-centre.

“We need personalised and relevant communications delivered to them at the frequency that they want,” Grattan said.

“We've got the platform and the tools in place to do that, but it's still going to take us some time through testing to optimise this.”

The digital-first focus, and better understanding of supporters, meant the charity was better able to react to changing circumstances or world events and to adjust its fundraising strategy and approaches accordingly.

Outside of the Salesforce and Pronto Pay implementation, UNICEF Australia moved all its IT systems to run in the cloud, and implemented a new finance system.

It is currently embarking on a website overhaul, as well as a HR information system replacement.

“I really took a ‘big bang’ approach with this,” Grattan said.

“While you can come at some of these projects incrementally, I blew up pretty much every system in the place at once and we put all new ones in.

“It was very high risk, but we had a really strong risk management approach to be able to do that. And it's paid off.”

Subscribe to the iTnews Podcast at Apple Podcasts, Google Podcasts, Spotify, Amazon Podcasts or wherever else good podcasts are found. New episodes will be released every Monday.