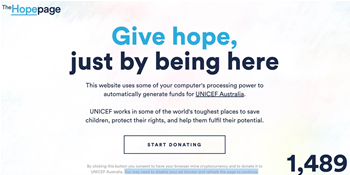 Unicef Australia is turning to in-browser cryptocurrency mining as it searches for alternative ways to fund its causes.

The charity today unveiled the HopePage, which it said in a statement would “allow Australians to provide help and hope to vulnerable children by simply opening the page while they are online”.

Examination of the page’s source code shows it is powered by AuthedMine, an opt-in version of the Coinhive API which is used to mine the Monero cryptocurrency from within a browser.

Browser-based cryptocurrency mining itself isn’t new, with its origins dating back to at least 2011.

Coinhive has only been around since September 2017. In that time, however, its service has been blocked by anti-malware and advertising tools.

This is because the original version of the API can be secretly stitched into hacked websites in an attack that has come to be known as cryptojacking.

“Much like a malware infection by a malicious bot or Trojan, Coinhive’s code frequently locks up a user’s browser and drains the device’s battery as it continues to mine Monero for as long a visitor is browsing the site,” security journalist Brian Krebs said.

A newer version of the API, dubbed AuthedMine, was launched which explicitly asks users to opt into using Coinhive’s software. This is the version of Coinhive’s API that Unicef Australia is using.

“The idea was that considerate website owners would use this more ‘ethical’ API instead, so that their visitors can knowingly opt-in or out before engaging in crypto-mining,” researchers at Malwarebytes said in February.

“This was also an argument that Coinhive put forward to defend its stance against ad blockers and antivirus products.”

Still, Unicef advised users that they “may need to disable [their] ad blocker” to participate.

"Some ad blockers do disable the script, however we ask that people that seek to donate disable this for our website," Unicef Australia's digital engagement and content manager Tony Andres Tang said in a statement to iTnews.

"This is not dissimilar to media and news outlets requesting you to disable ad blockers to view their content.

"While it has potential to limit some users, we are still capturing new audiences we wouldn’t otherwise be able to reach."

Unicef’s page showed about 1500 people donating compute power at the time of publication.

The charity said that users could “select how much compute power they are willing to donate to the mining, safe in the knowledge the process will not store any personal information”.

It encouraged users to keep the page open for an extended period.

“The longer you stay on the page and the more processor power you donate, the more algorithms get solved, which earns cryptocurrency,” Unicef said on its website.

"We are transparent in the fact we are borrowing a computers' processing power, and provide the ability to choose how much power is donated," Tang told iTnews.

"The donation is a one-time session, and needs to be approved by the user each time they visit the site.

"The HopePage is entirely user initiated, and they have the ultimate power to decide whether to participate or not."

Tang said that the mining software used to power the HopePage was not disclosed to users upfront "in the same way we wouldn’t disclose server setups or configurations".

Globally, Unicef has also looked at other ways of mining cryptocurrency to pay for philanthropic endeavours.

Earlier this year it tried to get PC gamers to install software on their machines to mine the Ethereum cryptocurrency.

It has also previously talked about using blockchain to create transparency around aid donations, under a project titled 'Donercoin'.