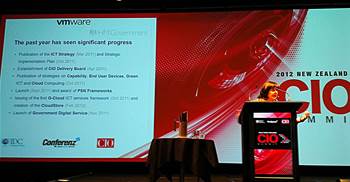 The British Government has saved £160 million ($AU248.8 million) and cut IT project times by a fifth as a result of its bid to cut procurement red tape and standardise supplier panels over the past 18 months.

UK Home Office IT director, Denise McDonagh — a government IT veteran of more than 30 years — told a CIO Summit in Auckland this week that her key priority had been to break large IT contracts.

Prior to the current initiative, some 80 percent of government IT contracts in the UK went to six suppliers.

The Government's ICT public service staff counted 135,000 professionals in total; an amount five times the number of Google employees worldwide, according to McDonagh.

A key part of the new procurement program, introduced 18 months ago, was to embrace smaller IT suppliers.

The government's CIO Delivery Board adopted a panel of 250 suppliers offering more than 1700 services. The six big government departments now procure services through the Government's G-Cloud framework, or "cloud store", that is open and transparent to both buyers and sellers of services.

Almost three-quarters of the 250 suppliers are small-to-medium businesses, according to McDonagh.

Savings from the new program come in contrast to the cost of doing government IT the old way, estimated at £17.8 billion ($AU27.6 billion) in the 2010-11 financial year.

The cost for even minor changes within government services could be excessive; McDonagh said it took £10,000 ($AU15,549) to simply change two lines of code to speed up server processing times.

McDonagh's predecessor Chris Chant produced a scathing criticism of government CIOs in April this year, arguing they were "guilty of taking for too long of taking the easy path".

"We have done the unacceptable," Chant said in a report released earlier this year.

Changing the way how things were done in government IT had been difficult, McDonagh said, as departments were tied in, both commercially and technically, to delivery partners.

Many smaller, more agile suppliers avoided government contracts due to the massive complexity of bidding for them.

One government initiative saw paperwork detailing schedules and requirements cut down from 300 pages to just 20.

Suppliers are now also vetted and accredited once — rather than multiple times — through the G-Cloud, allowing for the re-use of their services by multiple departments.

"With 250 suppliers, I can't have them all come to my office. Instead, we tweet constantly about what we're doing to stay in touch with suppliers," McDonagh said.

Other government departments had become keen on using social media, but McDonagh said the Government as a whole had yet to warm to the use of Twitter or Facebook.

McDonagh blasted concerns around the potential impact of social media on government productivity as "silly", but noted the more serious implication of safety.

The Government had also begun considering the use of application programming interfaces (APIs) opening up to third parties, a move already taken by the UK Inland Revenue.

This allows suppliers of mobile technology to provide solutions that make tax and revenue collection, as well as immigration services, more efficient through the use of "smart tablets".