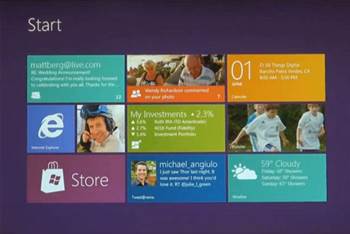 But are icons more effective?

User interface experts have expressed surprise at the re-design of the Windows OS interface, giving Microsoft the thumbs up for touch-based gestures and use of web app development standards.

A panel of Australian user interface gurus told iTnews the preview was significant.

Today, the desktop OS attempts to mimic the web.

Microsoft’s tiles “take the best from informational web-design and applies it to the main computer UI,” he said.

He was particularly impressed that Microsoft has chosen to run applications developed with HTML 5 and Javascript, to prepare for an “inevitable shift toward light-weight terminal computers that rely on web-served applications.”

Colfelt said Microsoft was “finally attempting to lead in the area of UI and experience, rather than following Apple.”

“It has always been to Microsoft's advantage to open up their system (for a reasonable fee) to the masses of developers and hardware manufacturers,” he said.

”Lots of programmers and machines equals lots of cheap programs and computers, and that means lots of accessibility for the consumer.”

Shane Morris, director at UI specialists Automatic Studio said the interface “shows that Microsoft is serious about embracing touch and slate-based modes of use within Windows itself – as it should be.

“Clearly Microsoft has thought hard about how to integrate the casual consumption model of tablet devices with ‘real’ operating system features like multi-tasking, file system access and rich applications that require extensive user input, like Office.” he said.

“Why abandon the power and familiarity of Windows if they can possibly help it?

“The use of scrolling panels of tiles is a natural extension of the use of tiles and panning ‘panoramas’ in Windows Phone 7, which are proving popular with users,” he said.

“Swiping left and right to scroll through choices is a very natural action, and leverages both spatial memory and muscle memory to help users find and re-find what they need.”

But Morris pointed out that the preview did not reveal any on-screen cues to users to show them how swiping in from the edge of the screen could activate operating system features like task switching. This could prove a sticking point until users grew used to the concept, he said.

Colfelt also noted that many of these same interactions would “feel clumsy using a mouse.

“That could cause RSI if the user gets too excited about using them,” he noted.

The only point on which the experts disagreed was the use of tiles on the home page. Whilst Colfelt felt it was a solution to what he calls “information spelunking” (areas of a site easy to fall into and hard to find your way back out of), Morris felt Microsoft was abandoning icons that have historically proven far more effective.

Tiles, Morris said, are difficult to differentiate and can crowd the screen.

“The use of larger, consistently sized tiles containing dynamic content has the potential to create a vista that ‘yells’ at the user – and the demonstrated use of bright, saturated colours might actually make it difficult for users to discriminate between tiles and to focus on individual tile content,” he said.

“We know that people use various cues to search the visual field. Outline shape is one of the primary prompts to help people discriminate and identify objects visually. The dominant and consistent rectangular shape of the tiles themselves means Windows 8 users cannot use this outline shape as the primary cue. They must instead rely on colour and the actual tile contents. Compare that to the carefully designed icons in Microsoft Office products. Those icons present unique outlines – for good reason.”

Morris raised concerns as to whether Microsoft would continue to support stylus and other pen-based input as well as touch.

What's your take on the Microsoft Windows 8 interface?