Turnbull: NBN gets harder to 'unpick' 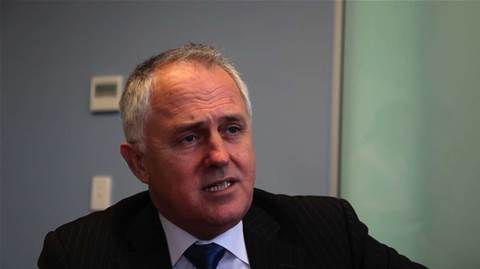 A Coalition government would now find it tough to sell down the network.

Shadow communications spokesman Malcolm Turnbull has conceded that NBN legislation passed this week made it harder for a future Coalition Government to sell down the network before it was finished.

Invoking Greek and Roman mythology, Turnbull told the CommsDay Summit in Sydney that the Government was "creating a very complex Gordian knot of [Telstra] contracts and legislation that is going to be very hard to unpick".

Reiterating the Coalition's broadband position - that Australians should get broadband but that it should be funded mostly by the private sector - Turnbull said a future Coalition Government would "face some real challenges achieving that courtesy of the NBN legislation".

"The legislation makes it, quite deliberately, extremely difficult - one could say impossible - for the NBN to be sold until the whole network is complete, a date past the lifespan of many of us I suspect, and only after the Communications and Finance Ministers [of the time] have certified [the sale]," Turnbull said.

"Selling the NBN will be harder than privatising Telstra was. That is a very big challenge.

"But on the other hand how can one justify continuing to spend tens of millions of dollars extra to get the policy objectives you desire?

"This is the whole basis of the [NBN] debate that is so frustrating."

Turnbull said the Coalition did not agree that the Government should re-establish "a son or daughter of the old Telecom".

"We want to see facilities-based competition promoted, not prevented," he said.

He also warned that NBN legislation aimed at stopping the rollout of networks that competed with NBN Co "simply to preserve the revenues of the NBN... [was] turning back the clock decades" when state governments legislated to prevent private sector competition against their businesses.

He said that the opportunity cost of the NBN had to be weighed against other infrastructure requirements in Australia.

"As a politician, I can understand a policy of 'No Australian child will live in broadband poverty'," he said, referencing former Prime Minister Bob Hawke's famous words.

"But there's no shortage of infrastructure requirements in Australia and no shortage of Australians who'd like to have tax cuts. The opportunity cost has to be [kept] in mind."

Turnbull pledged that a future Coalition Government would task the Productivity Commission with a "rigorous cost-benefit analysis to identify what is the most effective way of delivering fast broadband".

But he warned it was likely to be very different to the current NBN.

"I imagine it will involve a most significant change to the broadband strategy," he said.

Analyst firm Publicani's director Tim Williams called on Australian politicians on all sides to agree on a vision for broadband to allow the industry to plan for the future.