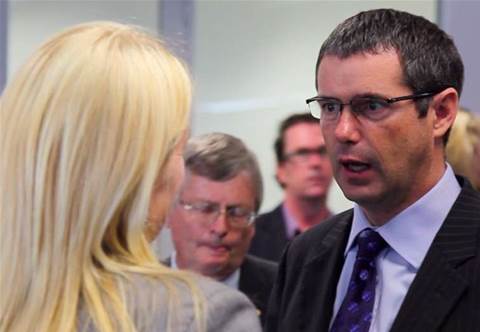 iTnews' full transcript of an interview with Stephen Conroy.

Ben Grubb:
Thank you very much for taking the opportunity to speak with us Senator Conroy.

Ben Grubb:
I understand that your mandatory ISP-level filtering scheme for blocking refused classification rated content from all Australians would see blocking of approximately a thousand or so URLs mandatorily by all ISPs.

Am I correct in saying that?

Senator Conroy:
Because we are working with international agencies I’m not sure, and because we’ve only just announced the decision, I don’t know that anyone has put a final figure on that yet.

I mean, I’ve talked with international agencies that are very active in this area and I think you are probably drawing off a number that’s roughly around what the ACMA blacklist [is] at the moment.

But let’s be very clear.

What we’re proposing to mandatorily block is not the ACMA blacklist.

And importantly, it is currently illegal to have it on Australian ISPs.

So to be very clear, the material we are talking about in refused classification is child pornography, sites like pro-rape web sites, bestiality web sites and web sites that advocate criminal acts like a terrorist act.

That is what falls within refused classification today.

That is what is illegal to buy in a book store, go to a film or a watch on telly or a DVD or in a library [or] in a news agent.

Ben Grubb:
Now obviously you just said there that it was “illegal”.

Refused classification and material that is “illegal”, I understand, they are two separate things.

Senator Conroy:
You are simply trying to follow a complete furphy.

It is illegal to have this material in a library, refused classification in a library or a news agent.

And what you are following is an attempt to try and confuse people.

Only the material I’ve just described is included in refused classification.

Lots of things are illegal.

But that is not what we are blocking.

We are blocking material that is currently refused classification.

Ben Grubb:
As I understand it, the Broadcasting Services Act requires illegal content, as you’ve just pointed out there: child pornography, to be reported by the ACMA or the Classification Board to the police and dealt with straight away. Now, currently...

Senator Conroy:
Unfortunately international servers where this material is hosted take no notice of the police or ACMA.

Senator Conroy:
If an Australian web site - an Australian hosted server ISP - was to put this up, it would be subject to a take down notice and potential police investigation.

And we have no jurisdiction for ACMA or the police to deal with those.

Ben Grubb:
Can we assume that the RC-rated list that will incorporate URLs that the Classification Board will look at international ones and consider whether that needs be added.

Can we, I guess, assume that as new URLs are added it would be expanded over time?

Senator Conroy:
I think that what the evidence shows internationally is that many of these sites are quickly put up and then quickly taken down.

So what is important is that we maintain vigilance in this area.

I mean, particularly in the last few years a number of Australian web sites have had individual pages hacked and, particularly, child pornography has been put up on them.

And then what has happened is internationally we have been advised that this is the case and they have been added to the existing blacklist that exists in Australia today - has for nine years - there’s actually been a blacklist for nine years [of which] most Australians don’t even know it exists - and so they have actually hacked into existing Australian web sites, targeted individual pages, and they’ve put material up and then they have advertised it.

Then quickly when people realise what has happened then ultimately they stop using those addresses and then material is delisted.

Ben Grubb:
And I guess that’s what happened with the Maroochydoore dog web site?

International agencies contacted us and identified individual pages within that web site that had been hacked.

And genuinely offensive material that all Australians would say was offensive.

Individual web pages, not the whole web site, but an individual page was identified.

Now what happened when the ACMA list, which included this site but it goes much broader than the list we’re talking about today, was leaked - and there were a number of lists that were leaked - not ones that were the ACMA blacklist.

What happened was a number of individual ISPs had added material of their own because they run their own filtering.

And so a lot of the sites in the original Wikileak were not actually ever on the ACMA blacklist.

Something reasonably resembling the ACMA blacklist was ultimately leaked as well.

And that is where some of the dog catcher and the dentist became famous.

But what people didn’t want, in some cases, to understand was they had been actually hacked by overseas predators and individual pages on the websites had offensive material; they were listed.

The international predator then went away.

They removed the material themselves and ultimately these web pages were delisted.

And that’s the way it should be.

Ben Grubb:
I understand that it was only delisted until someone was told at the ACMA.

What will happen in the future?

Senator Conroy:
There were a couple of important points there.

And we’re very conscious of wanting to, if we’re moving to the new regime, we need greater transparency and accountability measures.

And we invite everybody to put in a submission outlining how we can have stronger transparency and accountability measures.

So as an example.

Some of things we are suggesting that should be done and we want feedback on is it will have where a page has been identified on the blacklist as having say a child pornography site on it we would put up a note that says ‘hey, you’ve been blocked. if you have a complaint or you think it’s unfair contact this address’.

So instead of there just being nothing there would actually be a mechanism for somebody to appeal.

So if the Queensland dentist or the dog cleaning agency felt that their site, in actual fact, had been incorrectly targeted they would know and they would have the capacity to appeal.

So that is one of the mechanisms we think would be important in a new regime.

We think it would be important that there is external scrutiny of the list.

Now they are a body which is independent of Government.

They are a body that is not run or controlled by the Federal Government.

They are a body that’s operates with the support of all of the State’s and Federal Government.

Now, they have got fifty years or so of experience at making these judgements.

And I am sure they have made some decisions that you have disagreed with.

But they have a whole range of experience over time.

But this is an NSD, an organisation that is separate and not part of a government department or a bureaucracy.

And what is important is that because, and this something I have really struggled with: Should you release the list?

There is content insinuation this is a secret list therefore Conroy can do whatever he wants with it.

This has been probably the toughest part of my discussions around this topic.

And on balance after a lot of thinking about it we decided that we wouldn’t publish it as some of the critics have called for.

But what we accept entirely is that in this new regime the community needs to be confident that the list isn’t being manipulated for bad purpose.

And so we are inviting people to say what is a mechanism so the list can be scrutinised by someone other than Stephen Conroy or his department or ACMA or anybody else.

So we have invited submissions on what process.

So, a couple of examples that I’ve cited in the discussion paper: Should a cross-parliamentary committee look at the list and produce a parliamentary report?

Should it be the Classification Board themselves [who] look at the full list and they report?

Should there be an industry body set-up so that the ICT sector can nominate some people who would then have a look at the list.

So we are very conscious of people’s concerns in this area.

The thin edge of the wedge is an important argument and it is important that if anybody discovered as part of that process that Steve Conroy had slipped in Stephenconroy.com[.au] - which has been set up in the last few days - and it suddenly had offensive material that I didn’t like but wasn’t RC - now I can’t suddenly slip that on.

It is important that we have those processes; those independent tests.

So for any Australian who is concerned about that, and many are concerned about this issue, there is an avenue to put in a submission and tell us your thoughts about these transparency and accountability measures.