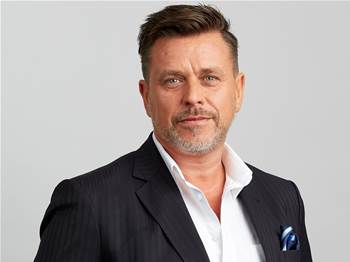 Podcast: Step behind-the-scenes on the post-merger integration of Vodafone and TPG.

TPG Telecom is taking a five-to-10 year view of its technology landscape and investments as it digitally transforms after forming from the combination of TPG and Vodafone last year.

In this week's CXO Challenge on the iTnews podcast, group chief digital and information officer Rob James discusses TPG Telecom’s merger and transformation into a digital telco, and provides his own take on approaching transformational strategy and initiatives.

James joined Vodafone Hutchison Australia (VHA) from Qantas in September 2019 with a specific remit to digitally transform the organisation.

Less than a year in, Vodafone merged with TPG to form TPG Telecom, and James was tapped to oversee the new group’s digital and IT operations.

“If I reflect back on what was expected of me when I first started in the [VHA] role, it was to drive a digital transformation and transformational ways of working, looking at the technology stack and how we can modernise it,” James tells iTnews.

“But we've been siderailed with a lot of things over the last particularly 18 months now that we've stopped and started that strategy a number of times.

“I think that it was only probably about nine months ago where we had to make a conscious decision to push forward with the strategy, regardless of what the environment was around us, because we just couldn't wait for anything any longer.”

Digital transformation, from a TPG Telecom group perspective, encompasses the considerable integration work of the merger, but also takes a much longer term view.

Both aspects are being pursued in parallel. The work itself is expected to take several more years to complete, but is intended to set TPG Telecom up for many more years beyond that.

“As with any merger, there's a lot of work that needs to be done when integrating the businesses … de-duplicating systems, rationalising systems and retiring legacy, so that's certainly one of my priorities.

“We're not making decisions that are just going to carry us forward a couple of years.”

James is currently leading a substantial body of work aimed at integrating the former TPG and VHA businesses, consolidating their respective application environments and technology stacks associated with the various brands they own.

“There is quite a lot of complexity,” James said. “Some of that complexity arises from TPG's side of the business, which has grown quite extensively through acquisitions over the last few years.

“Those acquisitions have meant that there's been acquisitions of technology, and some of that technology has yet to be integrated into the core platforms.”

The two telcos also came from different worlds: TPG had most of its operations in fixed line telecommunications while VHA was a mobile carrier.

“What does that mean? It means that what I'm dealing with right now is I have essentially over 800 applications that are across almost six or seven distinct end-to-end telcos stacks,” James said.

“A telco stack means we have multiple pieces of technology doing similar or the same thing, so you get this scenario where there's 15 billing systems and several CRMs and multiple data warehouses. That's the starting point.

“I would like to see those seven telco stacks and over 800 applications, probably go down to a consumer telco stack, a wholesale one, and potentially an enterprise and government one, so I'm really trying to rationalise from about seven to three [stacks], and trying to maybe reduce the applications by a good 60 percent or 70 percent.”

James said that could ultimately be “a four-to-five year journey” for the company. “It's going to take us a while,” he said.

“We're focusing on the areas that are going to give us the greatest benefit in the short term.

“In the last 12 months, we've been really focusing on coming up with the master plan for this and we've also been focusing on setting ourselves up as an organisation to deliver the success, which is around how we reorganise ourselves in the ways we operate.”

“We've focused particularly at the later end of last year and the early part of this year in digital and IT within my space is to reorganise ourselves to actually have the right people in the right roles, trying to build those autonomous teams that are going to be self-sufficient and multifunctional.

“We're also in the process of now integrating the digital and IT teams into the commercial side of the business as well, so rather than having the commercial leaders in our business come up with products and then ask IT to deliver them, we become one team.

“The commercial leaders and IT are fully integrated into a single team, squad or tribe to deliver on the outcomes that we have for our business.”

Behind-the-scenes - and in parallel with the merger-related work - TPG Telecom is also pursuing a broader digital transformation and evolution into a fully digital telco.

“The first layer is the technology layer, so how do we move away from multiple monolithic systems that are based on paradigms of telco that have been around for decades?” James said.

“If you talk to anyone in the telco space, they talk about OSS [operational support systems] and BSS [business support systems], which are essentially the layers of tech that bring the networks side of the telco business to the IT side and how it touches the customer.

“How do you think about that differently? There's a lot of work that has to go there.

“The second layer is around how you actually operate as a business, so the ways of working.

“Most telcos still operate in the context of large projects. Those projects start to become much more interweaved in how you deliver products as well so customers expect your products to be much more digitally-focused.

“So the second layer [for us] is changing those ways of working, moving away from project-centric concepts to product-centric concepts. On top of that, it includes things like rearranging yourself as an organisation to align people to how you want to operate.

“The final layer is the cultural transformation. What do you think about how people should behave? How should you embrace things like innovation? How do you make sure that you can break down the silos within the organisation, and that you're linked together to deliver an outcome per product or per customer experience journey?”

Within the technology layer of the transformation, James has classified TPG Telecom’s systems into three ‘platform’ layers: customer journey, business capability and core IT.

“The first platform ... touches the customer or is closest to the customer. So we call these our customer journey platform,” he said.

“The obvious [systems in that] are things like your e-commerce web channels, or how you deliver a digital customer experience, but it's also things like call centre technology, your overall CRM and IVR systems.”

“This is not so critical from a customer perspective, but is more critical from how you actually improve the digital operations within the business itself,” James said.

The final platform layer is core IT, which underpins everything else.

“It could be things like your cloud platform and your data enablement platform, which are the obvious ones, but it could also be things like how you handle authentication or identity management of your customers,” James said.

James said that dividing up the technology layer by ‘platforms’ helped the company “drive a very distinct strategy for modernising each of those” platform areas.

“The reason it's relevant to break it out into those ‘platforms’ is that your customer journey platforms are essentially where you own the customer experience and you want to be best-in-market for that.

You want to be able to provide the best customer experience, so you probably want to bring a lot of that in-house,” he said.

“The business capability platforms, in many ways, are going to be almost commoditised. The ERP we use or an ERP that our competitor uses may not have a massive difference to how we deliver services to our customers, and the same can be said about billing or payment systems.

“They're becoming less critical, particularly in the telco space these days where a lot of the plans that we go to market with are fixed price with fixed consumption. There's very little bill shock.

“Your core IT platforms are the ones that you need to modernise, making sure that you've got things like modern integration layers and that you're not relying on technology that might be 10 or 20 years old to integrate systems because it's going to slow you down.”

James noted that one of the major changes, both within telecommunications and more broadly, post-pandemic is the aggressive pursuit of digital transformation and digital experiences.

“What I'm excited about is if we're all on the same playing field, and we're all trying to do the same thing,I think it creates much more interesting opportunities for the years to come on how our business and other business will be able to integrate together, and in how we could uniquely bring our products and services together to create new and exciting products and services for our customers.”

Executives and commercial operations have their futures staked on digital success, which is driving different viewpoints and priorities into transformation efforts, creating even more opportunities for change.

“I think this year and next year and beyond, we're going to see massive growth in what we, what our competitors or even other industries are going to see come out of technology solutions.

“I think that can be nothing but exciting.”