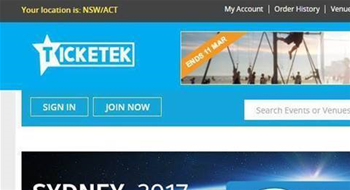 Ticketek operator TEG has restructured its leadership for the second time in less than two years in response to international growth and opportunities to grow its revenue base.

Chief operating officer and head of digital Cameron Hoy has been promoted to the newly combined role of chief commercial officer and managing director of Ticketing under the new changes.

Hoy’s new position is responsible for oversight of a number of divisions including TEG Analytics, TEG Insights, TEG Digital and Commercial, as well as all of the company’s global ticketing operations.

A spokesperson for TEG told iTnews the combination of functions in Hoy’s role reflects TEG’s increasingly globalised position, including in ticketing operations, such as the recent expansion into the UK and upcoming launch of Ticketek UK.

“At the same time we see an opportunity to increase revenue synergies between our  analytics, insights, digital and commercial businesses," the spokesperson said.

“[Hoy] is uniquely experienced and skilled to oversee all of these functions and maximise opportunities for TEG and our clients.”

Before that, he held roles including deputy CEO and markets leader of EY Oceania, and managing partner at IBM Global Business Services A/NZ.

The position of chief technology officer, helmed by Greg Willis since March last year, will continue to report to the chief operating officer and remains unchanged, TEG's spokesperson said.

“Our many technology projects continue to be run by our highly-capable CTO Greg Willis, who will now have the additional support of Ian Ball, who has more than three decades’ international experience working on digital technology strategies around the world," the spokesperson said.

TEG chief executive Geoff Jones said in a statement the new senior leadership team “is all about making sure we are streamlined for global growth in the longer term, as we battle the challenges posed by COVID-19”.

“Ian brings a wealth of global experience to our company, which will be invaluable as we look to extend our technology leadership and expand our integrated model globally," Jones said.