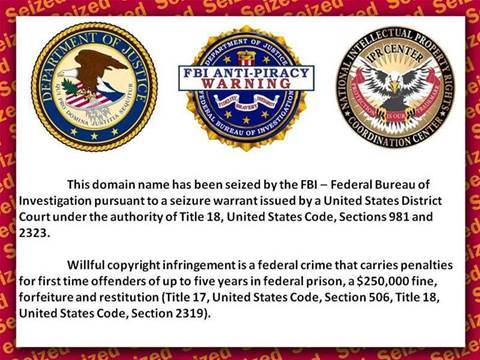 The US Department of Justice has seized the domain names of three websites accused of distributing pirated Android apps, in a joint operation involving the FBI, Dutch and French police.

The domains applanet.net, appbucket.net and snappzmarket.com were seized by the US government and now display a notice to that effect.

The Department said it was the first time website domains involving mobile app marketplaces were seized.

FBI agents downloaded thousands of copies of popular copyrighted mobile apps from the sites during the operation, saying these were distributed without permission from their developers who would otherwise have sold them in legitimate online markets.

Most of the servers storing the apps were found to be hosted outside of the United States. International law enforcement partners assisted the FBI in obtaining and seizing evidence.

Assistant attorney general Lanny Breuer said US law enforcement was committed to protecting the creators of mobile apps and other forms of intellectual property from those who sought to steal it.

"We will continue to seize and shut down websites that market pirated apps, and to pursue those responsible for criminal charges if appropriate," US attorney Sally Yates added.

Since 2010, US government agencies have seized hundreds of domains, including 150 in last November's "Cyber Monday" raid by the US Department of Homeland Security on sites accused of distributing counterfeit goods.

The controversial strategy has been criticised by civil rights groups as a violation of free speech.

Last year, US Senator Ron Wyden questioned the policy after it was revealed that agencies wrongly kept the domain of a hip-hop music review site for a year without giving the owner a chance to challenge the seizure.