The Melbourne road where speed limits are set by algorithm 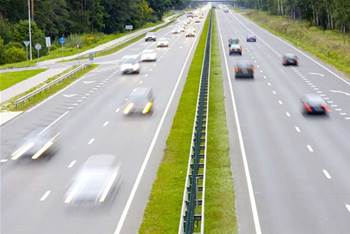 Since Monday, a computer has been in charge of deciding what speed cars can travel on Melbourne’s M80 ring road, and whether to change the limit according to a tailor-made algorithm developed by specialist researchers in Greece.

At the start of the week VicRoads switched on an automated system that will lower speed limits as far as 70km/h on the M80 according to what the algorithm calculates to be the optimum pace to prevent sudden braking and traffic congestion.

The director of the current M80 upgrade, Trevor Boyd, told iTnews that higher speed limits actually increase congestion because cars are forced to change pace suddenly, creating what he described as a “shockwave effect” backwards through heavy traffic as cars brake and then re-start their engines in a non-uniform fashion.

The algorithm judges the optimum speed cars should drive at to foster consistent traffic flows, using real-time measurements of vehicle volume, speed and the distance between cars that are collected by a network of sensors embedded in the road.

“It is about managing traffic congestion before it builds,” Boyd said.

“This way there is less of a shockwave effect and more traffic moving through a given point at a consistent pace.”

The algorithm could set speeds as low as 20 or 30km/h in theory, he said, but that isn’t on the cards at this stage - although it could be helpful when the state kicks off its $300 million upgrade of the M80 later this year and needs to close lanes for roadworks to take place.

VicRoads trialled a less-sophisticated version of the system on the M80 in 2014, when it had a team of workers at the central traffic management centre using the same sensor data to set variable speed limits manually.

Now it will process the same data through an algorithm developed by researchers from the Technical University of Crete, which is known for its pioneering work in this space, without human intervention.

At the outset, the automated system will only be used for the morning and evening peaks to prove the algorithm is effective, before being switched on for the full day - and even rolled out to other motorways and arterial roads in the state.

“By being smarter about the way we manage traffic, we can get Victorians home sooner so they can spend more time with their family and friends,” Roads Minister Luke Donnellan said in a statement.

Already, the Crete researchers have paired up with the team in charge of the Monash Freeway to see what a data-driven traffic management approach could do for it.