The e-book writes its second chapter 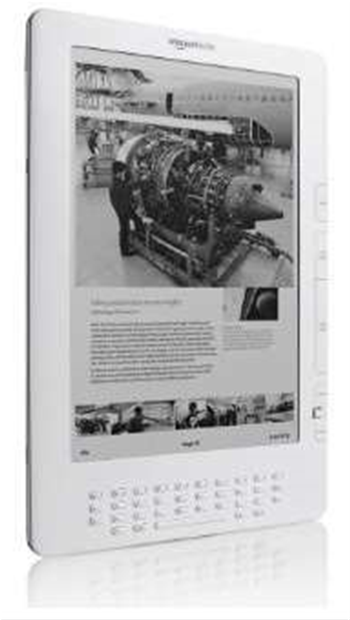 On the eve of the Australian launch of Amazon's Kindle DX with Global Wireless e-book reader and the rumoured announcement of an Apple iSlate "smartbook", iTnews asked Alexander Turcic for his thoughts on the industry's direction. Turcic has wrangled the ebook enthusiast community since 2004 at his ebook blog and forum website, mobileread.com.

iTnews: What does the launch of the Kindle DX for Global Wireless mean for the spread of Amazon's ambitions? Is this a pre-emptive strike against Sony's e-reader and Apple's Slate? What does it mean for bookseller Barnes and Noble's Nook, which doesn't have such a footprint? And can Amazon succeed in territories outside the US by selling only directly and not having a partner program of computer dealers and distributors reselling their devices and integrating them into corporate networks?

Turcic: Amazon announcing the worldwide release of the DX wasn't a surprise, but it is nevertheless an important development for the e-book movement outside the US. The problem abroad has been, until now, that many (for instance European) publishers felt reassured in defending their paper territory, making e-books as unpleasant an experience as possible.

Whether riddled by complicated DRM procedures (Sony Reader in Germany required you to download Adobe Digital Editions along with the Sony Software, download a personal key that is part of the DRM to your computer, and so on) or restricted by a very limited choice of book titles - in many countries, such as Germany, e-books are still in their infancy. It needs someone like Amazon to achieve what Apple did to the music industry: put enough pressure on the existing industry (here the publishers) to force them to embrace the new technology rather than to oppose it.

Whether Amazon had Sony or Apple in mind when making the announcement I cannot tell. I guess not so much Sony, since Sony has been building its territory abroad for quite some time and Amazon didn't feel the need to immediate respond. It could be that Amazon saw the need for a pre-emptive strike against Apple, which has already proven its success in shaping and dominating the music service business.

To succeed, Amazon would have to focus on foreign publishers and find ways to convince them to release more titles in e-book form, just as they did in the US. It is not going to be as easy because other important markets, such as Europe, are not as homogeneous as the US.

For instance, in Switzerland, prices for books are not fixed; here it would be possible to significantly lower the costs of e-books. Laws in other European countries like Germany require all bookstores, including online sellers, to sell books at fixed prices (they say, to protect independent bookstores and small publishers).

Amazon needs to find ways other than discounts on e-books to attract new customers to the Kindle.

What are the leading digital book formats?

AZW for the Amazon Kindle is the same format as MOBI, except that it uses a slightly different DRM [digital restrictions management] scheme. MOBI was developed by the French company Mobipocket, which Amazon acquired in 2005 (long before the Kindle). Simply because of Amazon's sheer market size, MOBI is a leading format.

ePub is an open format defined by the Open eBook Forum of the International Digital Publishing Forum. Because an increasing number of e-book devices are supporting ePub (among them the Sony Reader devices, HanLin, BeBook, Bookeen and Netronix), it is considered an evolving standard. However, incompatibility can still be an issue if the embedded DRM scheme is not supported by the reader device firmware. Most ePub supporting devices today (but not all, like e.g. the Jetbook) also support ADEPT, the DRM scheme from Adobe Digital Editions. DRM-support is essential for reading purchased ePub e-books, most of which are protected by DRM.

With so many readers and formats what is the likelihood that consumers will become confused and delay their decision to buy? Amazon may have the dominant slice of the market but there are dozens of e-readers and as many file formats; is this inhibiting the growth of ebooks?

No, I don't think the number of new readers inhibits growth. When I visited the Frankfurt Book Fair (world's largest book fair) two years ago, almost nobody seemed interested in e-books, and only two known players were on the market: Sony (with their Reader PRS-500) and iRex (with the iLiad). Of these two, only iRex was present at the fair. When I asked the iRex rep about rumors that Amazon might start their own e-book device, he told me (with a sincere glow in his eyes) that his company wasn't afraid of Amazon; in fact, they'd embrace Amazon and anyone else who would enter the market, because with an increased number of companies and devices on the market, production costs would go down (keep in mind: so far most e-book devices are based on E Ink, a former MIT-spinoff that got recently acquired by PVI, a Taiwanese company, who happens to be also the panel producer for most e-book device vendors).

Also, it would require the constant inflow of news (new devices, new players) to make prospective customers aware that e-books are not just a short-term fad.

In regard to the different formats, I think the problem was more severe before ePub began its way towards becoming a de facto standard. For instance, until recently, Sony (the second biggest player after Amazon), used their own proprietary e-book format called BBeB. BBeB was guaranteed to only work with Sony Devices, so if you ever decided to switch to a non-Sony device, you'd not have been able to bring along your existing e-book library.

Last month, however, Sony switched to ePub; in fact, as a Sony customer, I was able to redownload all of my previously purchased e-books in ePub format, which I could then read on other (authorised) devices as well. One of the reasons why ePub has become successful in recent months is, paradoxically, Amazon's market dominance. Smaller players realised that the best chance to compete against Amazon and their competitive e-book pricing is to embrace ePub, a non-proprietary format that would give the customer the flexibility to read e-books on other devices as well (something Amazon doesn't).

Flick to the second page to find out which of LCD or Electronic Ink is best for book reading?

And learn how QuokkaPad, the Australian ebook, plans to take on Amazon, Apple and Microsoft.