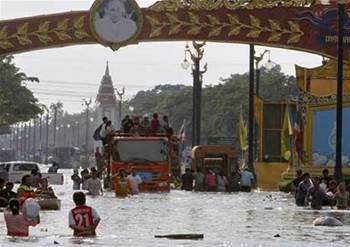 Enterprise slugged up to 15 percent from next year.

EMC and HP will increase large-scale storage system prices by up to 15 percent from the beginning of next year due to the Thailand floods.

The companies sent letters to their respective partners this month, The Register reported.

They are some of the few enterprise storage vendors to indicate hard disk price rises due to the floods so far.

EMC told its Velocity partners to prepare customers for the 5 to 15 percent rise over its fourth quarter price list, which will take effect from January 1.

HP told its customers the shortages particularly affected "large capacity" SAS and SATA drives but did not reveal how much they would rise. Component prices had already increased 20 percent, it said.

Analysts in November predicted at least a 30 percent fall in hard disk shipments in the first quarter of 2012, but noted only the potential impact on PC manufacturers.

Depending on how the price rises flow through globally, the impact on Australian businesses could be significant. It remains the largest storage market in the Asia Pacific region, according to analyst firm Gartner, with a 19 percent growth in enterprise storage Q4 2010 revenues for vendors locally.

Gartner noted in its third quarter 2011 enterprise storage report that the storage market had slowed slightly but that Thai floods did not impact the quarter's results.

The vendors' messages to partners indicate this will change next year.

It appears even EMC's Australian staff have been caught off-guard, with EMC Australia's chief technology marketing officer Clive Gold in November telling media the floods had not affected its supply of enterprise storage drives.

A spokesperson for Hitatchi Data Systems, the fourth largest storage supplier in the region, however said its component supplies had been affected.

Western Digital earlier this month restarted production at one of its Bangkok facilities but predicted shortages would continue well beyond March 2012.

WD and rival Seagate have estimated the industry only has the capacity to produce between 110 and 120 million hard drives in the December quarter, falling well short of the 170 million to 180 million units in demand by customers.