A group test of server and client-based spam filtering solutions shows that most have become less effective at catching junk mail, according to an independent testing body.

UK-based Virus Bulletin tested 19 anti-spam solutions for its March comparative and noted that  of these, nine saw the percentage rate of missed spam at least double whereas only three improved the amount caught.

Compared to a previous test, a spam message was almost twice as likely to make it to a user's inbox this time around, Virus Bulletin said. 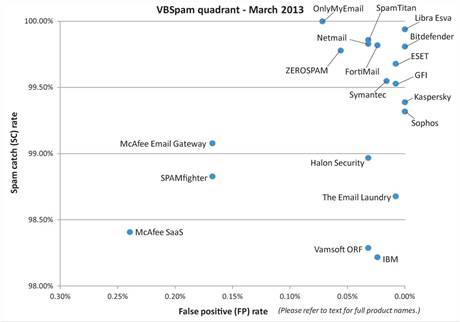 In the latest test, the biggest problem for the anti-spam solutions was phishing emails. More than half of the solutions missed at least 10 percent of such messages.

Worse, legitimate emails were problematic too for the spam filters: just four managed to correctly identify all of the ones used in the test.

"It is obvious why missing a phishing email is bad and could have serious consequences, but even an ordinary spam email can be much more than a nuisance in the inbox," Virus Bulletin's anti-spam test directors Martijn Grooten said.

While spam levels have declined over recent years and catch rates remained high, Grooten nevertheless said that detailed analysis of spam filters show that more junk mail is making it through the defences.

Of the 19 solutions tested, 17 earnt a VBSpam award. The top two products were Libra Esva and Bitdefender, both of which had no false positives.

At the other end of the scale, McAfee's SaaS Email Protection which is a cloud-based solution, failed to achieve an award, ditto the SPAMFighter Mail Gateway.

The Virus Bulletin test ran for sixteen consecutive days, with 84,576 emails being sent, 71,298 of which were spam.