Tesla Motors opens its patents to the public 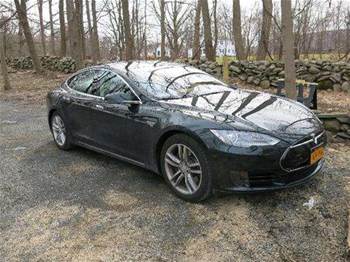 Tesla Motors will allow others to use its intellectual property in hopes of speeding up development of electric cars by all manufacturers.

Tesla co-founder and CEO Elon Musk said the company would not take legal action against anyone who "in good faith wants to use our technology".

Musk said in a statement the industry would benefit from open-source sharing of technologies, and his company had been founded to speed the growth of sustainable transport.

"If we clear a path to the creation of compelling electric vehicles, but then lay intellectual property landmines behind us to inhibit others, we are acting in a manner contrary to that goal," he said.

Musk said the move included all of Tesla's patents, including several hundred current ones and several thousand in the future.

"We think the market's quite big enough for everyone," Musk said.

"It doesn't really harm Tesla but helps the industry, and I think actually it will help Tesla, mostly with respect to attracting and motivating the world's best technical talent."

He said investors should be more concerned about whether a company is able to attract and motivate the best talent than the contents of its patent portfolio.

Many tech companies view the explosion of US patent litigation as a drain on innovation and have become more vocal about policies intended to prevent their patents from being used in court.

However, those policies often come with caveats: In 2012, Twitter said it would no longer pursue “offensive litigation” based on its own patents, but reserved the right to use them for defense if the company was sued by someone else.

Likewise, nothing in Musk’s announcement rules out Tesla’s ability to use its patents as bargaining leverage in the event another car manufacturer threatens Tesla with a patent lawsuit, said Joseph Chernesky, a former Boeing patent executive now at Kudelski Group.

“There’s really no change,” Chernesky said. “Companies who don’t need to assert their patents don’t, and most companies don’t.”

Any patents owned by Tesla supplier Panasonic are not included in the sharing move, Musk said. Panasonic has said it plans to be the sole manufacturer at Tesla's planned "gigafactory" for battery production.

Musk said his company will continue to file for patents in part to keep competitors from attaining them and then blocking Tesla and others from using the information.