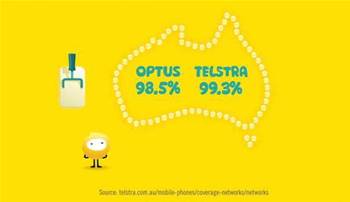 Telstra has defeated Optus in a court battle over an Optus advertisement Telstra claimed misled viewers about the difference in geographic coverage between the telcos’ networks.

Justice James Elliott this afternoon found in favour of Telstra, saying the Optus ad was misleading and deceiving.

"The message that Optus says it seeks to convey in relation to population coverage could have readily been conveyed without the use of a map of Australia," Justice James Elliott said.

"It must be assumed that Optus made a conscious decision to include the map, and to insert the figures referable to Optus and Telstra inside the map, in the way that Optus did, to achieve a particular purpose.

"I accept the submission made on behalf of Telstra that these aspects of the advertisement were part of a deliberate advertising strategy that was calculated to benefit Optus’ business."

Telstra's claims for damages and corrective advertising have been held over until a later date.

Telstra said in a statement the ruling was a win for consumers.

“Optus has been caught out misleading Australians by implying their geographic network coverage is similar to Telstra’s."

Optus said in a statement it was "disappointed" in the ruling.

"We have been consistent and transparent in how we communicate the less than 1 percent difference in the population reach of the Optus mobile network compared to Telstra’s, and these clear facts have not been in dispute," Optus regulatory affairs VP David Epstein said.

"Today’s battle has been about how you portray network reach, but what Telstra is really afraid of is a discussion on price."

Optus claimed in the advertisement in question - which went to air in January - that there was less than one percent difference between the reach of either network, comparing its own population coverage of 98.5 percent of Australia to Telstra’s 99.3 percent.

The statistics were displayed in a map of Australia, which Telstra argued suggested the figures related to geographic coverage rather than population - which it said was “false, misleading and deceptive" given its network reached 2.3 million square kilometres of Australia (28 percent of the landmass) compared to Optus’ 1 million square kilometres.

"In their latest TV commercial they have tried to create the impression their network coverage is, to quote their words, 'less than 1 percent' smaller than Telstra’s," Telstra said in a statement at the time.

"This is plainly false. The difference in geographic coverage is literally many hundreds of thousands of square kilometres. It’s a reality anyone venturing beyond cities or using their phone in back bedrooms and car parks understands."

Counsel for Telstra drew on last year’s legal battle between the ACCC and TPG over misleading advertisements, in which TPG was forced to pay a $2 million fine after being found to have hidden the true costs of a product it advertised for $29.99.

Telstra’s lawyers drew on similarities between the cases, and said Optus had been similarly selective in its presentation of evidence in the ad.

As in the TPG case, Telstra’s lawyers argued Optus had “selected for emphasis information which is apt to mislead or deceive”.

They said the nature of televised advertisements meant viewers at home would be attracted by the general thrust of the ad and would therefore be more prone to overlook “curative words, qualifications and disclaimers”.

The hearing also centred around whether an average Australian would rightly be expected to understand the difference between population and geographic coverage.

Telstra counsel said ordinary Australians would not discern that there was a difference between population and geographic coverage, and would take ‘coverage’ to mean where a signal was able to be accessed.

In its defence, Optus cited a video ad Telstra ran on YouTube in December, which at one point displays a map of Australia with the words ‘3G’ inside.

Optus argued the image implied that Telstra users can get 3G anywhere in Australia, and was just as open to misrepresentation as its own ad.

The telco's counsel said it was “a bit rich” for Telstra to take issue with the Optus ad when Telstra was running an advertisement on its website and YouTube which Optus claimed was also misleading.

“What our friends are telling Your Honour in their written submission is that to deploy the map of Australia when talking about our reach to Australian mobile consumers is misleading and we shouldn't do it ... but, Your Honour, it would seem that it is okay for Telstra to do it and, frankly, it's just a little bit rich because they are doing the very thing that they are having a go at us for,” Optus counsel said.

Optus argued Telstra did not qualify the reference to 3G with a population percentage in its ad and said the graphic could be understood to mean that users could get 3G services anywhere in Australia, which was inaccurate.

Justice Elliott said the the submission was of "marginal, if any, relevance," due to the difference in broadbast medium (YouTube vs television), the use of the map while clarification of coverage is discussed, and lack of suggestion around percentage of land mass covered.

Telstra filed the lawsuit against Optus in early February and successfully won an injunction against Optus running the ads on YouTube pending the trial result, but the ads continued to run on TV.