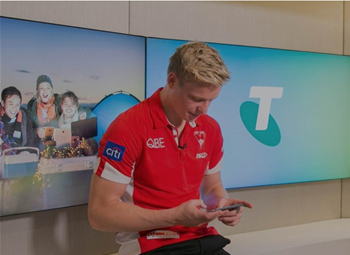 LTE-B - not just for AFL fans.

Telstra has revealed that live sports streaming on its mobile network using LTE-B technology is already above expectations, with plans afoot to expand the capability to other sporting codes.

It allows the telco to reach many sports fans using a single high-definition video stream in each cell, instead of requiring each customer in the cell to pull down a separate stream.

“Today when a large group of people in the one area want to watch the same content on their smartphones or tablets at once, individual content streams of data are sent to each individual device (i.e. one to one),” Telstra said in July last year.

“With LTE-B, we can send that content via a single stream of data to many mobile users in the one area at once (i.e. one to many).”

Since it launched, LTE-B has been used to stream AFL games via a mobile app. It can also only be accessed by owners of Samsung Galaxy S8 and S9 devices.

But Telstra said the results had been strong, and this will shortly lead to an expansion of LTE-B streaming to more sporting codes.

At an invitation-only roundtable coinciding with last month’s Mobile World Congress in Barcelona, Telstra Networks & IT commercial engineering executive Sri Amirthalingam provided a first-look at the telco's first eight months with LTE-B enabled on its network.

Amirthalingam’s slides also show that “80 percent of Samsung devices streamed at 720p (HD)”, compared to “75 percent of other non LTE-B enabled devices [which] streamed at 576p (SD) at best”.

The quality difference in streaming experiences was stark.

“The bitrate varied up and down up to 100 times in a single session” - compared to LTE-B, where users saw a sustained stream.

Telstra said that although LTE-B is available across its network, it only “kicks in once a threshold is met.”

“On activated cells we observed ~12 percent of traffic carried via LTE-B to capable devices,” Amirthalingam noted.

Telstra said that within three months of launching LTE-B, it had “broadcast more than 50 games and live events, resulting in 43,000 streams to broadcast users equating to 4700 hours worth of consumed video.”

The telco indicated that LTE-B streaming should have already become an option for mobile viewers of the A-League last month. NRL streaming appears set to follow in May this year, and netball in July 2020.

Aside from improving the viewing experience of live streams, LTE-B also reduces the strain that streaming popular events can have on the mobile network.

The mobile capacity freed up by multicast viewing is particularly valuable for telcos and customers; Telstra has said since the outset that a one percent reduction in peak mobile traffic on its network would pay for the rollout of LTE-B technology.

The telco said it remains committed to other use cases for LTE-B technology, including using it to distribute large software and game updates, and also for broadcasting information to emergency responders.