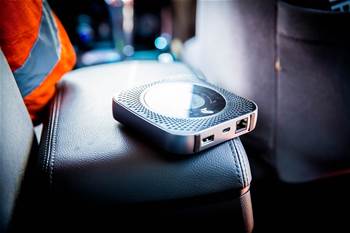 Up to 80 percent of network to see higher speeds.

Telstra is switching on capabilities in its 4G network that will bring gigabit peak speeds to five CBD zones across Australia.

The telco will launch gigabit LTE speeds in the Sydney, Melbourne, and Brisbane CBDs in mid-February, with Adelaide and Perth slated to join later this year.

Coverage will encompass the CBD as well as about a one kilometre fringe, Telstra’s director of wireless engineering Channa Seneviratne told iTnews.

And the telco is also planning to bring the peak gigabit speeds to other “high-traffic” areas beyond the CBD zones.

“Our spectrum asset holdings give us the potential to expand,” Seneviratne said.

Telstra has form working with technology partners like Ericsson to tweak the 4G network to be capable of higher peak speeds.

The latest tweaks provide a peak downlink speed of 1Gbps and peak uplink of 150Mbps.

In tests performed in Sydney today, the company managed actual speeds of 930Mbps down and 120Mbps up respectively, Seneviratne said.

“We’ve aggregated 3x20 MHz carriers together,” he said. “On two of those carriers we’ve got 4x4 MIMO also activated, and the third carrier has 2x2 MIMO, so that gives us 10 data streams.

“On top of that all of those carriers also have a higher order modulation scheme, so they’ve got 256QAM. That altogether gives us the theoretical 1Gbps peak speed.”

While two of the features that Telstra has enabled focus on achieving that 1Gbps theoretical downlink speed, the other feature targets improvements in the uplink.

“What we’re enabling there is we’re aggregating 2x20 MHz carriers on the uplink as well as using 64QAM - previously we used 16QAM,” Seneviratne said.

“That gives us a theoretical peak uplink speed of 150Mbps and in our demos we hit 120Mbps.”

Seneviratne noted that the theoretical downlink increase from 600Mbps to 1Gbps was Telstra’s “most significant change in peak speeds” since launching its 4G network.

Customers hoping to take advantage of the new peak speeds will need a gigabit class LTE mobile device. The first of these lands in mid-February, a Netgear Nighthawk M1 that will cost $360 outright.

Telstra said the Nighthawk “can charge smartphones on the go and doubles as a media server for watching movies or storing large files".

The Nighthawk will also be capable of supporting up to 20 different end user devices connecting to it via wi-fi.

This is likely to help Telstra corner a larger chunk of the enterprise mobility market.

“For example, there’s a construction company who are able to use the Nighthawk device in the field and because it can connect up to 20 wi-fi streams simultaneously, all those workers can connect their laptops up to this 1Gbps-enabled device, and they all get a pretty good experience.”

However, the telco also hopes the new service will tempt consumers in CBD and fringe areas to go mobile and not bother with a fixed line broadband connection at all.

“We also see an increasing number of people who rent and who choose not to get a fixed line broadband service,” Seneviratne said.

“This would be perfect if you’ve got a number of people in the family [or sharing the home connection].”

The missing piece, though, is how much data Telstra will offer on the gigabit portion of the network, and at what cost.

A spokesperson for the telco would not be drawn, other than to say that plans would be launched sometime in “mid-February”.

Something for (almost) everyone

While only a small portion of the 4G network is likely to see the gigabit speeds, Seneviratne said some of the enabling works would be experienced by users outside the gigabit coverage zones.

He said the carrier already had “256QAM enabled across all our 4G base stations today” and is working to enable 4x4 MIMO at “80 percent of our 4G sites”.

“Even if you don’t have a gigabit device, there are a lot of smartphones out there [that] can start to take advantage of 4x4 MIMO and see better data speeds as well,” Seneviratne said.

“We’re not talking about gigabit speeds but they’d be getting up to 300-400Mbps.

“So this rollout we’re doing isn’t just targeting 1Gbps. It’s going to benefit a lot of other customers as well.”