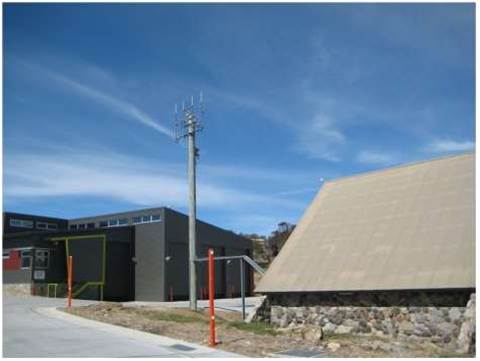 Telstra is planning to build a new, bigger mobile communications tower in the NSW ski village of Perisher to improve 3G signals to the area and avoid National Park employees getting hit by falling ice shards.

According to a planning report issued on behalf of Telstra by property consulting firm Urbis, the telco wants to replace its current 11m pole with a 26.3m monopole at the Perisher Valley Telstra exchange.

The telco said the pole would improve 3G services to the region, minimise the visual impact of the structure, and would mean NPWS staff were less likely to be hit by falling ice shards that had built up on the antenna.

"Particularly during the winter months... ice often builds up on the antennas and frequently falls during windy conditions or thawing periods."

According to the proposal, the change was requested in response to a request by the NSW National Parks and Wildlife Services (NPWS) to improve occupational health and safety standards of workers that frequent the Waste Transfer Station, located nearby the exchange.

A spokesperson for NPWS told iTnews that no official OH&S cases had been lodged as a result of falling ice. Telstra did not respond to request for comment by the time of publication.

No signal for skiers

The current 11m metre pole doesn't cover the nearby ski slopes for emergency communication, the report said, and did not adequately service the 50 percent yearly growth in data and internet use in the area.

The proposal noted that building a 25m pole and relocating it within its exchange property would address such issues.

NPWS also requested the Telstra facility be moved in order for its workers to obtain greater access to its Waste Transfer Station, built recently near the rear of the Telstra Exchange building.

The current 11m timber pole and antenna mounts, sitting adjacent to the waste station, were installed as a temporary measure by Telstra when the station was found to be cutting out the signal of the pre-existing facility. The proposal noted that the current pole restricts vehicle movement within the yard, posing a problem for the adjacent waste station.

Will you be heading to the snow this year? How have you found coverage in the past?