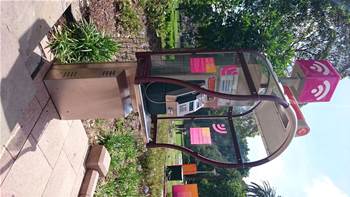 Telstra customers and non-customers alike will free get access to the first 1000 hotspots switched on as part of a limited trial of the telco's $100 million national wi-fi network.

Telstra in May announced plans to invest more than $100 million into a national wi-fi network involving 8000 Telstra-built hotspots in public phone booths around the country and 1.9 million wi-fi access points provided by its customers.

The network will also include 12 million hotspots outside Australia thanks to a partnership with wi-fi provider Fon.

Once officially launched, the network will only be free to Telstra home broadband customers. Anyone else will be charged a "small" fee to access the network.

However, Telstra has decided to offer access to the first 1000 hotspots - located in Sydney's Hyde Park, Bondi Beach and Manly, Melbourne's Bourke St Mall and King George Square in Brisbane, among others - free of charge for a limited trial period.

The telco made the announcement while switching on the first 150 sites today. The remaining 850 will be activated before Christmas. Users can locate their nearest hotspot using a dedicated website.

For the trial period - which will run until the "end of summer" - any mobile device user will be able to log on to the network free of charge for a 30 minute session. No data cap will be imposed, Telstra said.

Given the open nature of the network, the telco urged users not to use the hotspots to engage in any data transfer that could be considered sensitive, such as mobile banking.

The telco said it was working on implementing a security solution for the national wi-fi network, but said it would not be available until around the second quarter of next year.

The telco also faces the challenge of enticing its home broadband users to share a portion of their bandwidth with other Telstra broadband customers in order to make up the remaining 1.9 million hotspots it wants to offer around the country.

Those who join the “wi-fi community” will be able to use their broadband allowance at no extra charge across the network.

To lure home broadband users onto the network, Telstra said it had started offering the necessary Gateway Max product - normally valued at $210 - as a default inclusion in selected new home broadband bundles.

"We are preparing our home broadband customers now with the inclusion of the Gateway Max modem with our bundles that launched a few weeks ago," Bird said.