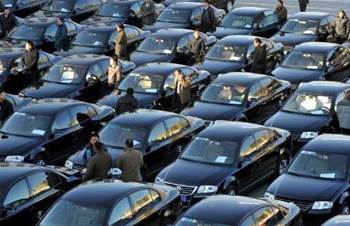 Co-develops single SIM product to work across operators and markets.

Telstra has joined an alliance of mobile operators seeking to simplify machine-to-machine telecommunications across multiple countries.

The seven operators hope to bring a unified M2M product to market by around the end of the year.

They are working to create a single SIM that can operate across multiple geographies.

Telstra's M2M director Mike Cihra told iTnews that car and consumer electronics makers that embedded SIM cards in their products did not want to have to deal with separate mobile operators in each territory those products were sold.

"We started conversations on how we need to come together to provide a united front to the market because that's what they're asking for," Cihra said of the seven founding operators.

"We've all now made a commitment to come together [and] put together a real program."

Although the alliance hopes to present a united commercial front to manufacturers and other customers on multinational M2M sales, there appears little appetite to harmonise spectrum requirements for M2M across member countries.

"I don't know that's something we see as a requirement right now," Cihra said.

Cihra still sees mobile operators dealing, for example, with car makers that want to embed SIMs in vehicles, rather than the end customers of those vehicles.

"The car company is the one we'll [as carriers] have the arrangement and direct relationship with," Cihra said.

"They will buy services from us and we will provide services out to them, they will then effectively take out those services and bundle that into a proposition they will take out to their customers."

"[Drivers will talk to] the car companies. It will be their solutions [that drivers will] be buying and consuming".

However, he noted that financial responsibility for the SIM is "evolving".

Within the alliance, Cihra said customer engagements would likely be led by a single operator.

"It's likely that where we have an operator that has the closest relationship with that customer, it would likely be that operator that would lead the engagement," Cihra said.

"It will be case specific, and there's certainly some finer points we'll need to address and will be addressing over the next several months."

Cihra said Telstra had seen traction for M2M in transport and logistics, security, vending and mobile point-of-sale applications, although there had also been some interest from utilities and mining firms.

"Broadly, there's a lot of interest from those who rely on assets in the field and want more visibility of where those things are and what state they're in," he said.

Cihra said the carrier was working with "a couple" of mining and natural gas customers, though mining and LNG "would not be in the top two or three" vertical industries for M2M use in Australia so far.

He said it was "still very early days" for the M2M market in Australia, and that Telstra had focused on creating opportunities through partners that develop vertical industry systems.