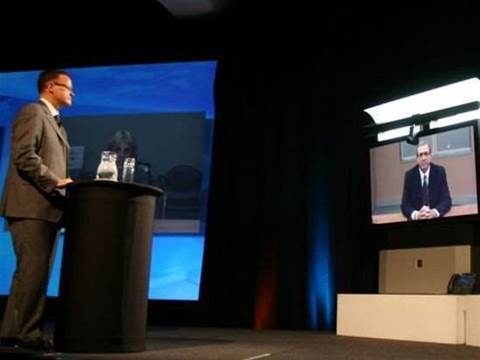 Telstra has used the Sydney leg of its annual enterprise and government executive roadshow to implore customers to hand off more computing responsibility to the carrier, making them your “one throat to choke”.

Geason promoted alliances with the likes of Microsoft and Cisco and the integration between their products and the Telstra network as reasons to put more emphasis on switching to managed services.

"We want to be the one throat to choke in terms of that deployment," Geason said.

"We remove significant risk and cost in the deployment of those solutions."

"There's someone else's throat to choke or as I like to look at it one back to pat when you get it right," he said.

Telstra used the roadshow to promote the findings of its productivity indicator, released in February. It also demonstrated high-definition video conferencing, saying the future is "video, video, video".

CTO Hugh Bradlow appeared as a hologram at the Melbourne leg of the roadshow while a Geason hologram was broadcast in Sydney.

"We haven't sold a lot of hologram technology in the past 12 months so we thought we'd better change the game and do something more tactical [HD videoconferencing]," he said.

"These holograms aren't cheap to do. It was a bit like a TV production and it felt very unusual because I couldn't move much at all when it was being done.

"Also, when displaying the hologram, there was an incredible amount of support needed around me - there were three or four people running around so it was a very expensive exercise and not particularly practical."

By contrast, Ossipoff claimed HD videoconferencing systems were within the reach of many enterprises due to potential return-on-investment. He also said the experience at Cisco's videconferencing centre was so ‘real' that executives often instinctively leant forward to shake hands with virtual participants when the meeting finished.