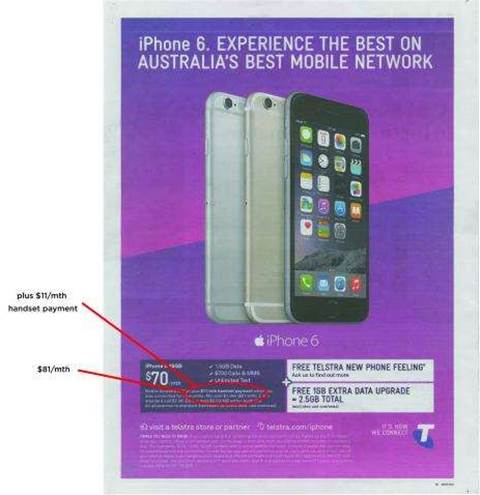 The ad the ACCC took issue with

Telstra has been forced to pay $102,000 for misleading customers about the true cost of one of its iPhone 6 plans.

The Australian Competition and Consumer Commission today said it had issued an infringement notice against Telstra over an ad placed by the telco in a newspaper in late September for the smartphone.

The consumer watchdog said Telstra had advertised the iPhone 6 plan as costing $70 per month, neglecting to highlight an extra $11 customers would have to pay for the handset itself.

The ACCC said the additional payment - which brought the monthly cost to $81 - was only disclosed in fine print, which the watchdog considered to be misleading and in contravention of Australian consumer law.

“Consumers should be able to understand the true cost of an advertised product so they can make informed purchasing decisions,” ACCC chairman Rod Sims said in a statement.

“Businesses must be careful about using attention grabbing headline prices to ensure that their advertisements do not mislead consumers about the actual price they will have to pay. This is especially the case for bundled goods and services like phones and plans."

The ACCC noted that Telstra's payment of the penalty did not equate to an admission of guilt. The watchdog said it could issue such an infringement notice where it had "reasonable grounds" to believe consumer protection laws had been contravened.

A Telstra spokesperson said the telco had been "surprised" to receive the infringement notice as its ad had "prominently stated" the total minimum cost "as legally required".

"And we're in line with the way many others in the industry advertise mobile plans with handsets," the spokesperson said.

"The ad in question was displayed in a full newspaper page so all the text was much larger.

"Even though we are strongly of the view our ads complied with the law, we have paid the notice. In addition, we’ve made some changes to our advertising to make it even clearer to customers what they will pay each month for a plan and handset. We now consider this matter closed."

The Telstra spokesperson said the telco saw scope for such issues to be resolved through "constructive engagement between industry and the regulator" rather than through "formal enforcement mechanisms".