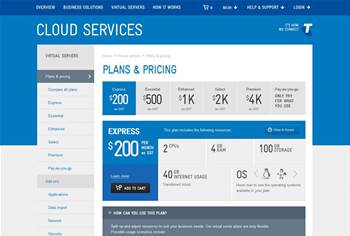 Telstra has launched a cloud computing portal to open up the purchase and provisioning of virtual servers to the small and medium business market.

The telco, which has been trialling cloud computing services with early adopter customers under the ‘Network Computing Services’ brand for over 12 months, has launched a self-provisioning engine for virtual servers at http://cloud.telstra.com.

Customers can order virtual servers at pay-as-you-go (on demand) pricing, or via a range of subscription plans, and combine them with a broad range of additional network and security services.

Whilst the BMC Software-based portal and published rate card [pdf] offers a new level of transparency and self-provisioning for Telstra customers, behind the scenes the telco hasn't yet refined the network automation customers might enjoy via other public cloud services such as Amazon Web Services.

Upon ordering a subscription plan, customers will need to wait 24 hours for Telstra engineers to provision the service, or a full week if the service is bundled with a private connection to Telstra’s NextIP MPLS network.

Gaul also revealed that the telco plans to soon offer its traditional dedicated hosting and software-as-a-service products from within the same “Cloud Services” portal. He confirmed that “Telstra Cloud Services” has replaced the “Network Computing Services” brand.

Telstra’s pricing, which has been in market for six months but not transparent to the public until today, is set at a slight premium to international competitors and local start-ups such as Ninefold.

Telstra charges around 21 cents per GB per month for storage, versus around 18 cents from Ninefold and 11 cents (US) from Amazon (Singapore).

Customers pay the largest premium for the lower latency of a local cloud – Amazon’s data transfer rates are between 11 and 19 cents (US) per GB, whereas Ninefold charges AU$0.90 per GB (AU) and Telstra AU$1 per GB (AU).

Gaul was relatively unconcerned - noting that Telstra’s early adopter customers had preferred the certainty of a fixed monthly subscription charge (at between $200 and $4000 per month) over pay-as-you-go pricing. Telstra customers can move between the various subscription plans within the monthly billing cycle, he said, and Telstra makes a pro rata adjustment on the monthly bill.

And where Telstra might be unable to compete on price due to the scale of its global competitors, today's portal launch proved the telco can differentiate in terms of the depth of its offering.

The breadth of security and networking add-ons advertised on the rate card [pdf] would appeal to the security conscious, as would the opportunity to combine cloud computing services with a private connection to Telstra’s NextIP MPLS network.

Gaul said that 80 to 90 percent of customers have paid for this private network option.

The portal also offers two differentiated levels of access for customers using the same account – one level for the business manager purchasing the service, another for the IT administrator charged with managing the service.