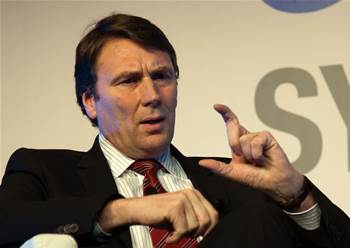 Telstra has flagged plans to hold a shareholder vote on its $11 billion agreement with NBN Co in October, even if it does not receive approval on a structural separation undertaking lodged with the competition watchdog.

Chief executive David Thodey said Telstra's board had made "no final decision" on the possibility but that the telco would consider the option in order to retain momentum on the NBN.

The Australian Competition and Consumer Commission's (ACCC) approval of Telstra's structural separation undertaking, submitted in late July, remained as one of the last obstacles to the enactment of the $11 billion agreement.

It also remained a key proviso to approval by Telstra shareholders of the NBN agreement itself, which had been slated for the telco's annual general meeting on October 18, following several months of delays in signing and approval of the agreement.

The competition watchdog had indicated it would take at least 28 days to publicly consult on the structural separation plan but additional material from Telstra and NBN Co on the issue had yet to be published to the watchdog's website.

An ACCC spokesman did not return a request for comment at the time of writing.

However, Thodey confirmed at Telstra'ss full-year financial results announcement today that the company could push ahead with vote regardless.

"We've got to keep the momentum going here otherwise it's just going to get too complicated," he said.

"We're trying to balance this, because there's a lot of work to be done.

"The commencement of the agreement will still be subject to gaining the necessary approval from the ACCC."

He said the consultation process with the ACCC had differed from previous regulatory processes undertaken by Telstra.

Telstra had worked more closely with the watchdog to ensure the provisions in the undertaking were likely to be approved, he said.

Thodey reassured shareholders the telco wouldn't waste its time on a superfluous vote.

"Boxing with clouds" on alternative

The explanatory material on the NBN agreement, to be distributed to shareholders ahead of the vote in October, would outline the company's consideration of different separation proposals.

But Thodey warned the materials would not include detailed responses to an alternative policy proposed by shadow communications minister Malcolm Turnbull in recent weeks.

"As much as the shadow minister might have options, they're not really relevant to me until he's in power and has the law passed," Thodey said.

Despite promises from Turnbull that a coalition policy would be enacted quickly, Thodey argued that any legislative changes would take a "lot longer further forward".

Any change to current NBN policy would also require renegotiation of agreements with Telstra, which would in turn require further shareholder approval.

Thodey had previously asked shareholders to vote in October on the best outcome for Telstra, rather than playing hostage to politics.

"I can only deal with the reality I have in front of me and I don't have any options," Thodey said.

He said he didn't want to "box with clouds" on the issue.

Optus chief executive Paul O'Sullivan had also told media today the rival telco would "work with the Government of the day".