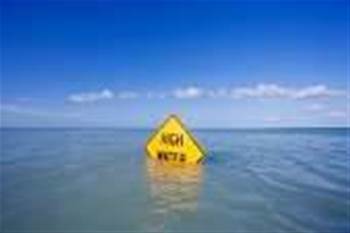 Telstra has flown techicians in to repair a flood-damaged fibre optic cable between Gladstone and Bundaberg in Queensland that it says "carries much of the state's communications needs".

The telco said that severe flooding in Colosseum, about 72km south-east of Gladstone, had damaged the coastal cable. The flooding is caused by ex-Tropical Cyclone Oswald.

"A repair crew has arrived in Colosseum by helicopter to attempt repairs on the damaged coastal cable and begin restoring services," a spokesman said.

"All restoration efforts will be weather dependant, but the team is in the process of running cable in an attempt to reinstate services."

A cable near Harlin that could usually act as a backup has also been damaged by flood waters.

"As the weather clears, technicians will attempt to access the area by helicopter or road with the help of local emergency services to begin works."

"Many 2G, 3G and 4G mobile services throughout Central and Northern Queensland have also been impacted," it said.

While it had a crew working on the Colosseum cut that was impacting fixed services, the carrier hoped to be able to restore some 3G services using a transmission route via Darwin.

Rival Optus said it was suffering mobile and fixed service disruption in a number of parts of Queensland, primarily due to power failures.

Assistance had been sought from utilities Energex and Ergon to restore power at "priority" sites.

"There are scattered mobile outages across Central and South East QLD regions to varying degrees including Mt Isa, Longreach, Emerald, Dalby, Tin Can Bay, and Rainbow Beach," Optus said in a statement.

"In South East QLD there are some disruptions to individual mobiles sites in Brisbane, Ipswich, Gold Coast and Toowoomba due to power outages. However overlapping coverage from surrounding mobile sites should ensure a continuation of services in the vast majority of areas.

Optus said its main transmission paths into Queensland were undamaged.