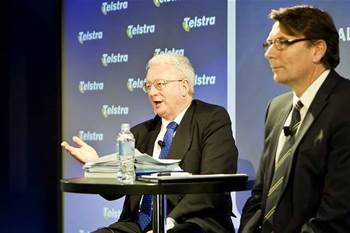 Telstra chief David Thodey has talked up the carrier's ability to win new customers as it recorded a 36 percent drop in net profit after tax for the first half of the financial year.

The telco today reported a decline in sales revenue of $60 million to $12.2 billion and earnings before interest, depreciation and amortisation (EBITDA) down 13.9 percent to $4.58 billion.

Telstra's fixed line PSTN business continued to decline, dropping 8.4 percent to $2.74 billion for the half.

But it did manage to turn around fixed retail broadband declines of last year, adding 139,000 services in the half.

"We continue to be buffeted by a PSTN headwind, but the decline was more than offset by a rise in mobile revenues," chief financial officer John Stanhope said.

The mobile business - including services and hardware revenues - was a shining light in the results.

Mobile services grew 6.5 percent or $210 million, while mobile hardware revenues were up 37 percent or $153 million.

Almost a quarter of Telstra's mobile customer base were now using smartphones, which meant higher average revenues per user (ARPU) for the carrier, Thodey said.

"The impact of that significant increase in the customer base is not yet evident in the sales [bottom] line but that's just a matter of time," Stanhope said.

Thodey said that customer growth in the half was the strongest in at least a decade.

The telco's expenses did, however, increase with its customer acquisition push.

Mobile hardware costs of goods sold rose 44 percent to $616 million and mobile subsidies were up a similar percentage to $457 million.

"We spent a little more than planned as we made a conscious decision to go after demand in the market," Stanhope said.

"As a result, we acquired more customers than we expected.

"In the second half, we anticipate that we will continue to invest in subsidies and the cost of goods sold to keep the [customer acquisition] momentum going in our business."

Stanhope said that Telstra would offset these expenses to support its customer base growth by finding savings in "other areas".

"This is about our success in the market and we intend to continue to deliver on our financial guidance," Stanhope said.

Telstra not only added customers in its mobile and fixed businesses. It also reported acquiring 214,000 T-Box and T-Hub customers in the half, and added 420,000 customers onto bundled plans.

"They have a much lower propensity to switch and churn," Stanhope said.

Stanhope also said that he expected very little cashflows from infrastructure leases and customer decommissioning under any signed NBN deal in its first three years.