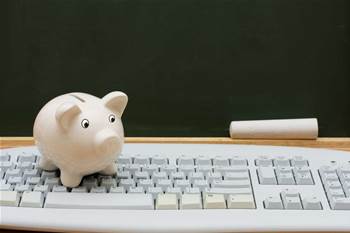 The Victorian Government has revealed that Telstra's exchange fire in Warrnambool last year cost the local economy an estimated $408,000 a day.

The figure is included in a substantial submission to the federal inquiry into the impacts of the fire, and is sourced from an economic assessment commissioned by Warrnambool City Council, which is yet to be made public.

The submission (pdf) also reveals the impact of the fire and its aftermath on the delivery of state government services.

"For each day of the outage, the direct cost for the Warrnambool economy is estimated at $408,000," the State Government said.

"Local businesses and organisations were affected by the outage for between 5 and 21 days."

The submission outlines several extrapolations of the economic costs.

It puts total direct costs for Warrnambool at between $3 million and $7.6 million, or 0.18 of a percent of the total yearly output in dollar terms for the city.

When indirect costs such as "flow-on industrial and consumption effects" are added, the total economic cost of the exchange fire to Warrnanbool is between $5.5 million and $13.7 million.

Unsurprisingly, the cost of the fire and loss of telecommunications to the "Great South Coast" region is far worse.

The State Government warned the long-term costs of the outage still weren't quantifiable, nor were "key social costs associated with the fire", which include heightened community concern over the resiliency of telecommunications infrastructure in the area.

The cost estimates add to a growing body of economic data based on the aftermath of the November 2012 fire.

iTnews reported last month the preliminary results of an RMIT University survey of affected residents. That survey found 20 percent of respondents reported being out of pocket between $1000 and $10,000, and three percent said losses would run over the $10,000 mark.

iTnews has unsuccessfully sought an update from Telstra on its own internal investigation of the exchange fire.

The Victorian Government is critical of both Telstra and the Commonwealth over access to compensation.

Although noting Telstra is compensating its own retail customers, the State Government noted business customers of other carriers, such as those reselling Telstra copper services, were excluded.

"This appears to be an anomaly," the Government noted.

"The Commonwealth needs to consider how it can provide immediate relief for those affected by the outage, caused by a single private provider perhaps with the Commonwealth being able to recover these costs from the provider at a future time".

The Victorian Government called for reform to federal disaster assistance eligibility criteria, which could mean victims of a similar occurrence in future could claim such relief.

"There is ... a gap in current Commonwealth policy that looks to the cause of hardship –
the type of disaster - and not its consequences," the State Government said.

"For example, the Commonwealth Government's Disaster Assistance program only applies in the event of a terrorist event or natural disaster, such as bushfire or flood (not deemed relevant in the event of the Warrnambool exchange fire).

"The Victorian Government considers that disaster relief should relate to the consequence of the event, in particular, the hardship experienced following the event, rather than just the cause of the event, whether natural or related to human activity."

It added: "The Victorian Government accepts that the situation is different when direct cause is attributable to a single business which is responsible for compensation, however, timely relief is critical, so the Commonwealth needs to consider how it should provide assistance in such situations."

Telecommunications outages relating to the exchange fire had major impacts on the delivery of government services.

Community services organisations faced a huge surge in workload as they made visits to 900 wearers of health monitoring 'pendants'.

In addition, 54 schools lost access to "network connected services and systems, including the Internet, and administrative and curriculum systems hosted externally to all schools," though the timing "fortuitously" occurred at the end of a major exam period.

Train services also had to be cancelled, as Telstra provides "non-urban train radio" in some parts of Warrnambool, as well as back-up communications via its mobile network. Services were restored when drivers received Optus phones.