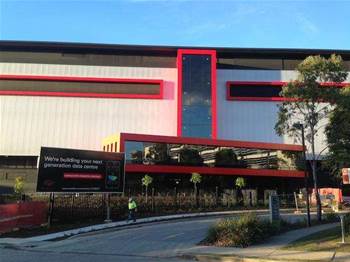 No plans to build its own co-lo facilities?

Telstra plans to scale up its data centre co-location capacity rapidly by taking space in NextDC's national network of facilities.

The two firms struck a national agreement yesterday covering co-lo space in Brisbane, Sydney, Canberra and Melbourne, and later in Perth once a NextDC facility opens there in February 2014.

Telstra saw an initial use case for enterprise and government clients that wanted to run hybrid cloud environments — running a mix of Telstra cloud services and managed co-lo space.

"We recognise that some of our customers want to complement their Telstra cloud infrastructure environment with equipment that is co-located in a managed data centre in their region," the carrier's director of cloud services, Michael Riad, said in a statement.

Telstra already has the capability to sell hybrid environments, though the managed co-lo portion of this service is based within the carrier's own data centre facilities.

"As our customers make the move into the cloud, some choose to move some of their IT hardware into a managed co-location environment, and to date Telstra has been provided these services through its existing network of Australian (and global) data centres," a spokesperson told iTnews.

"As our customer base grows, so does our need for additional capacity – the partnership with NextDC is a way for us to expand our Australian footprint quickly and cost-effectively".

Telstra isn't about to start serving its own cloud services from within NextDC facilities.

Telstra declined to name other use cases for the NextDC space. Neither party would confirm the volume of space Telstra has reserved within NextDC.

Telstra has of late been on a journey to consolidate multiple data centres into two large facilities, but its efforts have slowed due to industrial action.

Late last week, NextDC struck a separate partnership agreement with NEC Australia. Unlike the Telstra deal, NEC will use the NextDC facilities as a place to host its cloud services. NEC had previously invested in the Polaris data centre in Queensland for the provision of managed services.

Get your tickets to the Australian Data Centre Strategy Summit at the Gold Coast Marriott on March 18-20. VIP and one-day passes are still available.