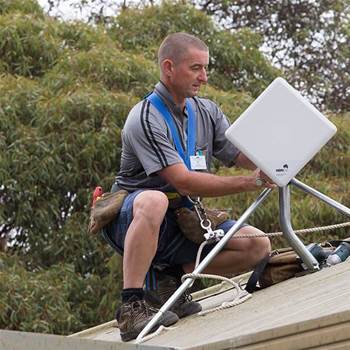 Internet providers are starting to move 151,000 users from the old NBN 50Mbps fixed wireless product to a new “best effort” service, but some customers will get more constrained uplink speeds from day one.

The removal of the current 25-50 (download)/5-20 (upload) speed tier product for NBN fixed wireless was first reported by iTnews in August 2018, and then announced publicly by NBN Co six months later.

The network builder said its existing 25-50/5-20Mbps product would be cut “by the end of 2019” and replaced with a new ‘best-effort’ product called Fixed Wireless Plus (formerly MAX) that was intended to launch in mid-2019.

But not every retail service provider will offer Fixed Wireless Plus in an up to 60/20Mbps configuration.

Emails received by existing 25-50/5-20Mbps fixed wireless customers on Telstra state that they will be moved to a Fixed Wireless Plus product with maximum 10Mbps uplink speeds immediately, instead of receiving up to 20Mbps on the uplink until March 2020.

Users will "still enjoy the same evening download speeds you experience today, however the maximum upload speed will be reduced from up to 20Mbps to up to 10Mbps," Telstra advised. 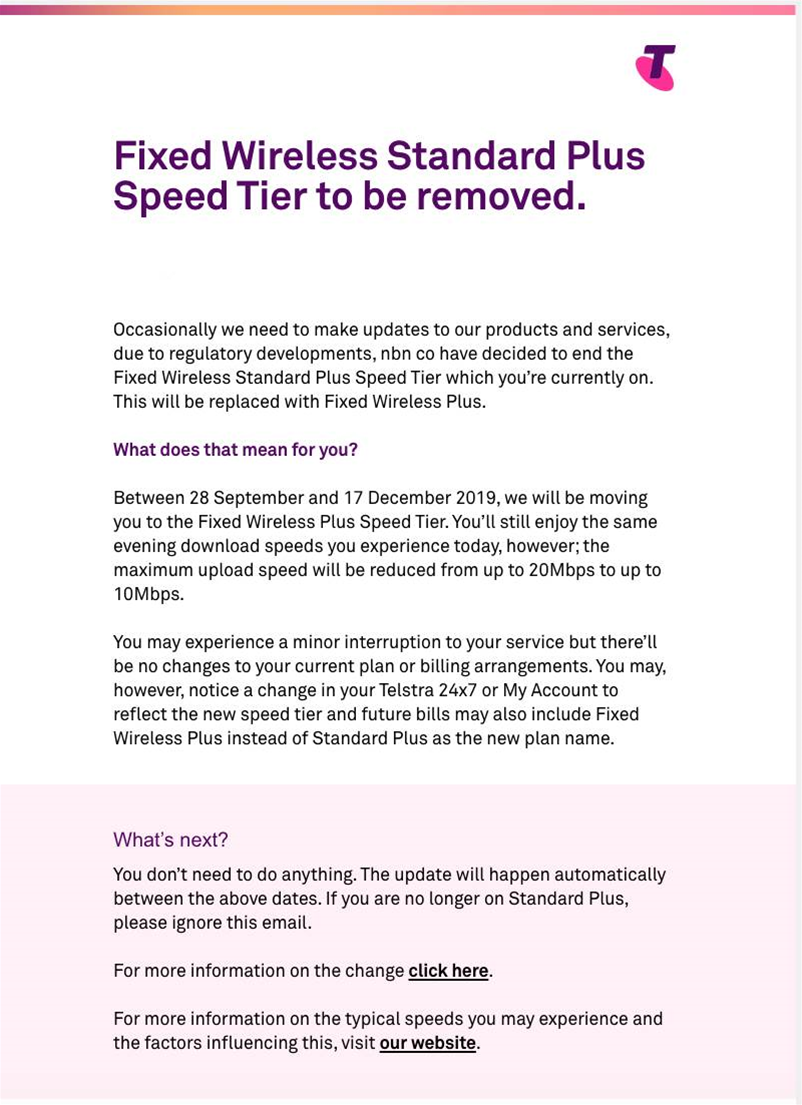 The emails led to speculation about what happened to the up to 60/20Mbps configuration of Fixed Wireless Plus.

iTnews has confirmed with NBN Co that the up to 60/20Mbps configuration of Fixed Wireless Plus still exists.

RSPs such as Harbour ISP are offering it with the full potential uplink, and others like Aussie Broadband similarly plan to do so.

A Telstra spokesperson told iTnews that it would effectively offer up to 60/10Mbps - and then up to 75/10Mbps - configurations for Fixed Wireless Plus to avoid having to communicate too many changes to users.

The commercial launch of Fixed Wireless Plus is already months behind schedule, and it appears Telstra sees little value in offering customers temporary "up to 20Mbps" uplink speeds before having to halve them in March next year.

"The upload speed of the new Fixed Wireless Plus plan will change from up to 20Mbps to up to 10Mbps," Telstra's spokesperson said.

"We’ve done this to prepare for NBN Co’s March 2020 plan to then modify its Fixed Wireless Plus offering up to 75/10.

"Changing the upload speed to up to 10Mbps now will mean less communication is required with customers.

"The Fixed Wireless Plus offering will offer up to 75/10 speeds to ... customers next calendar year when available."

One of the reasons Fixed Wireless Plus is late to market is that RSPs have had a tough time trying to describe it in a way that would not land them in hot water with the Australian Communications and Media Authority (ACMA) and the Australian Competition and Consumer Commission (ACCC).

"The issue has been working out how we describe it to ensure that we properly manage customer and regulator expectations," an Aussie Broadband spokesperson told iTnews.

Still, Aussie Broadband will run with the standard up to 60/20Mbps profile for the first few months, before changing it to up to 75/10Mbps.

"Our communications to existing customers mention the starting point of 60/20 and the later change to 75/10; we think it’s reasonably clear," Aussie Broadband's spokesperson said.

Telstra's spokesperson similarly alluded to problems at their end trying to position the best-effort service.

"The downlink speed of the new Fixed Wireless Plus plan is capable of up to 60Mbps, but neither NBN Co nor Telstra guarantees this as it is determined based on a number of environmental factors," the spokesperson said.

NBN Co is being forced to offer smaller uplink speeds on fixed wireless as part of new interference management conditions being imposed in the spectral band it uses.

“On 20 July 2018, the Minister for Communications issued a direction to the ACMA [Australian Communications and Media Authority] to take necessary steps to ensure spectrum users in the 3.4GHz to 3.6GHz bands conform to standard interference management conditions, including adopting specified downlink and uplink network configuration measures,” NBN Co has previously said.

“A uniform configuration adopted by all operators across these spectrum bands will allow for a more efficient use of spectrum across the bands by reducing the need for ‘guard bands’ (unused spectrum) between spectrum bands used by different licence-holders.”

As of June 30 - the last numbers release by the Australian Competition and Consumer Commission (ACCC) - there were 151,358 users signed up to 50/20Mbps fixed wireless plans, and only 21 users on Fixed Wireless Plus.

In other words, 52 percent of all NBN Co’s fixed wireless customers need to make the transition to the Plus product.

It’s not just NBN fixed wireless services that are becoming more asymmetric in their speeds.

NBN Co is currently consulting with industry on proposals to create more asymmetric high-tier products on the fixed-line portion of its network.