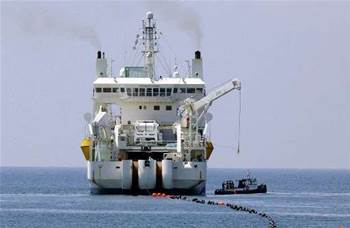 Telstra has signed agreements with Southern Cross Cable Network and received regulatory approval to become a 25 per cent shareholder of the subsea circuit operator, as mooted late last year.

Furthermore, Telstra has agreed to become an anchor tenant of Southern Cross' SX NEXT extension cable between Australia and the United States which is expected to become operational in 2021.

First floated in 2016, SX NEXT was costed at US$350 million in April this year when Alcatel Submarine Networks was contracted to manufacture the cable.

The project will now go ahead and is now said to cost approximiately US$300 million, with funding through Southern Cross held debt and further equity from its shareholders.

Southern Cross will also not pay dividends to shareholders for the 2020 and 2021 fiscal years, to help fund the SX NEXT build.

The new cable will give the Southern Cross system that currently offers 20 terabits per scond a substantial, 72 Tbps capacity boost over four fibre pairs.

On top of promising the lowest latency between Australian and the United States, the SX NEXT will have branching units and optical add-drop multiplexers to connect Fiji, Tokelau, and Kiribati.

SCCN has already secured a Sydney site for SX NEXT and landing arrangements in Auckland and Los Angeles.

As a result of Telstra's increased stake, Southern Cross owner Spark will see its shareholding in the trans-Pacific cable operator drop from 50 per cent to 40 per cent.