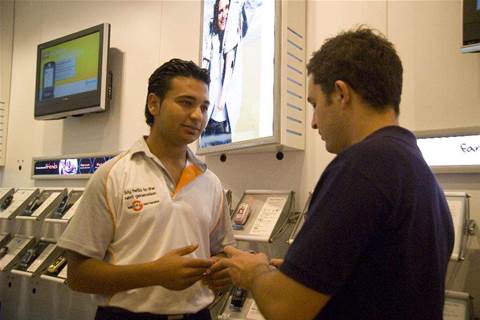 Telstra's chief technology officer has promised the carrier's mobile subscribers a greater degree of choice around what applications are available on their smart phones.

Telstra CTO Hugh Bradlow told Mobile World Congress in Barcelona late last week that the carrier - which has traditionally limited customers to using its own mobile apps and services at the expense of third parties - has now accepted that it can't wall in user choice.

"So we see ourselves as being a facilitator, like a shopping centre," he continued. "We create an environment in which customers can go to a store of their choice, not the one we direct them to. We may have of course our own store in that shopping centre, but our prime goal is to be a shopping centre."

"Two years ago, operators thought they would be the main game on mobile content," he said. "Content would come from third parties, but always through the carrier.

"Most operators globally have now taken a more open approach, acknowledging that third parties can develop apps faster. The speed of innovation on the internet is so much faster than what a carrier can achieve internally or even through partners."

A case in point is Apple's app store, which has now enjoyed three billion downloads. Apple was the first handset manufacturer to convince Telstra to open up its walled mobile experience.

"Operators have no choice now - they have to support different applications and app stores, but they won't support everything," Burley said.

Back at Mobile World Congress, Bradlow told the audience that a more open approach to apps is fraught with challenges.

One challenge is the increasing number of application platforms a carrier is expected to support.

"We probably have too many phone environments," he said. "There is no end in sight to the fragmentation. We need to reduce the number of operating systems. We need common APIs for the handsets."

Bradlow said that to develop an app for the total mobile market, a developer would need to test against 1000 variables."

"The apps just aren't worth enough to do that," he said.

Burley said Telstra has taken a "wait and see" approach to most mobile platforms, being among the last in Australia to accept the iPhone, and embracing the Android platform twelve months later than most anticipated.

"Android has shown momentum for 18 months, especially in the last six to twelve, and Telstra didn't rush out to get a handset," Burley said.

Now that Telstra has announced it will carry an Android phone, Burley expects the carrier will build in its own billing into the Android app store and develop its own apps and services for the Android platform, but would still offer some level of choice.

Despite Telstra's newfound 'open approach', Bradlow expressed some concern as to what he saw as an imbalance between the investment required by carriers to accommodate mobile data and the profits application developers are enjoying in the process.

"We have a significant problem," he told the audience.

"The value, as far as the user is concerned, is always in the application, not in all the underlying infrastructure that enables the application. If you want a proof point for that, users are not prepared to spend one cent more for internet-delivered video than for walking to the store and picking a DVD, even though it's more convenient to get internet-delivered video.

Bradlow said that "all the investment is going into [the infrastructure]."

The total global infrastructure spend of carriers is in the order of US$280 billion, he said, of which around US$52 billion is spent on mobile networks.

"I had a look at the combined R&D spend of the top five application companies - Microsoft, IBM, Apple, Yahoo, Amazon - in total they only spent US$21 billion," he complained.

"You can't expect to get all the return on less than ten percent of the investment."

Burley said that this was a dilemma fixed telecommunications providers had suffered for some time.

"Google's profits, for example, are made on the back of investments by infrastructure providers," he said. "The carrier has to pay to keep investing to increase capacity.

"But equally - the content providers naturally argue that there would be no demand for mobile broadband if it wasn't for them.

"Whether telcos can recoup from their investment on access alone is where the rubber hits the road. If they can't, we have a problem," Burley said.

"We need carriers to make money. That's in everyone's interest."