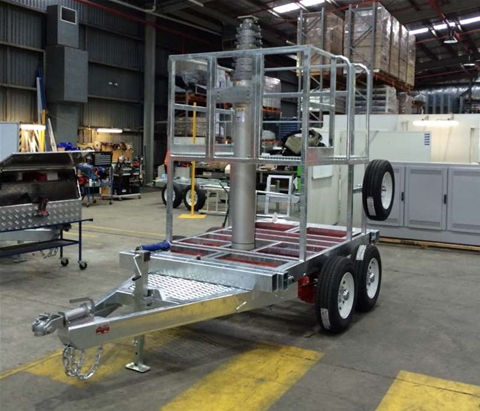 Telstra is building its biggest mobile exchange on wheels (MEOW) in response to a review of its emergency connectivity strategy in the wake of the 2012 fire at its Warrnambool exchange.

The November 2012 fire knocked out services to up to 60,000 users and caused damage to 60 percent of the exchange.

Residents of Warrnambool and surrounds were without voice and internet services for an average of 10 days. The fire sparked a federal inquiry to canvass fire prevention, service continuity and disaster recovery in such an event.

In the fire's immediate aftermath, Telstra used MEOWs to get affected customers back online. It added a third MEOW to its fleet at the time, the Mark III, which was able to support double the amount of ADSL2+ and PSTN services as the Mark II.

The telco late yesterday revealed it had reviewed its mobile exchanges and cells on wheels (COWS) fleets following the fire, and was now in the process of adding two new units.

The new "Big Cat MEOW" will be the largest in Telstra's fleet, the telco said, and will be able to provide 2000 PSTN lines - more than double that of the Mark II MEOW -  768 ADSL2 lines, and three sectors of 3G850/LTE1800 mobile coverage.

The Big Cat MEOW will be joined by a state mobilenet radio cell on wheels (SMR COW). Both are expected to be operational by the end of June, Telstra said.

Telstra spokesperson David Pitz, who conducted the original review into the fire, said in a blog post yesterday said the telco was halfway through completing the list of recommendations made from the investigation.

"While we would have preferred the fire at Warrnambool not to have occurred, the lessons we’ve learned will stand us in good stead for the future," he said.

Getting rid of redundant kit

The fire taught Telstra some other unexpected lessons.

The telco noticed an unexpected and significant drop in the consumption of power at the Warrnambool site in the months following restoration, Pitz said, and discovered obsolete and redundant equipment damaged in the fire had previously been eating into the facility's power usage.

As a result, Telstra embarked on a nationwide effort to identify redundant equipment and remove it from the network.

"Not only is our power consumption being reduced, but by removing unnecessary equipment we are also minimising the risk of electrical faults and fires," Pitz said.

"The equipment is left in situ for spare parts which improves the availability and accessibility to spare parts in our exchanges."

The fire cost the local Victorian economy $408,000 for each day of the 20-day outage, while Telstra spent over $10 million restoring the damaged exchange. The fire was later revealed to have been spread through the exchange's cooling systems and fire doors, which had been propped open.