Telstra: $4.7 billion better off under NBN Better to cooperate than compete.

An independent report into Telstra's deal with NBN Co and the Federal Government has determined the telco would be $4.7 billion better off by cooperating with the National Broadband Network rollout.

The report was released today alongside an explanatory memorandum of the deal, ahead of a vote by Telstra shareholders at the company's  Annual General Meeting (AGM) on October 18 in Sydney.

“The Telstra Board unanimously recommends that Shareholders vote in favour of this resolution,” the company said.

The independent report was commissioned from consultancy Grant Samuel by Telstra.

It calculated that, with the Government talking tough on telecommunications regulation, Telstra would be $4.7 billion better off if it cooperated, than the nearest alternative.

Telstra chief David Thodey told press and analysts that the estimated figure did not take into account the losses shareholders have suffered since Telstra was progressively floated and the Government’s NBN deal was first announced.

“You’ve got to look at the total story of what the shareholders have had to go through – T1, T2 and T3 and what value has been realised, and what happened when the NBN was announced.”

The explanatory memorandum stressed the NBN rollout would go ahead without Telstra's participation should shareholders disapprove of the deal.

Telstra chairman Catherine Livingstone said in Telstra’s annual report that the Government’s policy “will result in a net loss of value of Telstra overall, irrespective of whether Telstra participates in the rollout of the NBN.

“The Directors consider that the Proposed Transaction is likely to offset part of the loss of value associated with the Government’s commitment to introduce the NBN and separate parts of Telstra’s business, and that it will deliver an overall result that is materially superior to any other option realistically available to Telstra, given current Government policy.” 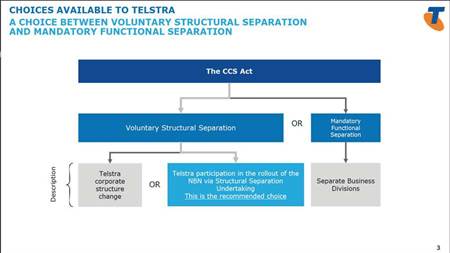 Thodey said Telstra directors had sought an independent view on the value of the transaction in the interests of being "transparent" but  he was hesitant to express his personal confidence in the figure.

“If we had a significant different view, we would have to say something," he explained. "While we have some differences in assumptions, we think it’s in the right ballpark.”

Directors will vote in favour, he said, to ease the regulatory burden on the company.

“Directors have looked at this in every way possible, and we are unanimously in favour,” he said.

Telstra shareholder approval is one of three barriers to the deal going ahead.

Competition regulator the ACCC has expressed concerns about whether Telstra’s structural separation undertaking and draft migration plan are adequate.

NBN Co also had to have its structural access undertakings accepted by the ACCC in order to operate.

Newly appointed commission chairman Rod Simms said this week that the regulatory approval process should not slow the roll out of the network.