As part of the deal, Telecom NZ will house Inmarsat's GX antenna at the Warkworth Satellite Earth Station and backhaul data nationally and internationally, via the Southern Cross Cable System.

The value of the deal was not disclosed. A Telecom spokesperson told iTnews the information was commercially sensitive.

Global Xpress or GX will feature up to 50 megabit/s download and 5 megabit/s upload speed for customers, and operates in the Ka-band. Six satellite access station locations have been selected by Inmarsat so far. 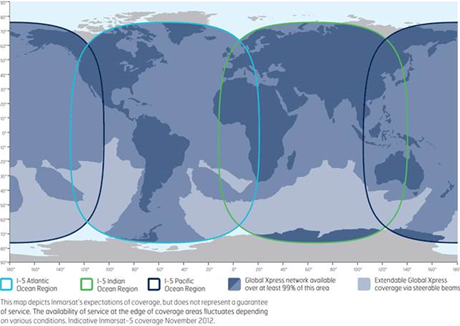 A constellation of three Inmarsat-5 satellites is being built by Boeing Space and Intelligence Systems in California, with the first one scheduled for launch in the new year. All satellites will be launched from Baikonur Cosmodrome in Kazakhstan by Russian Proton rockets.

GX ground terminals are expected to be between 45 centimetres to 2.4 metres in size.

Another target market is armed forces and government customers. Inmarsat said GX was suited for bandwidth intensive mobile applications such as airborne intelligence, surveillance and reconnaissance for these.