Telcos send out millions of COVID-19 SMSs for Aus government 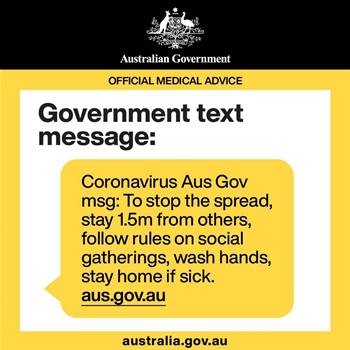 Updated: Chosen by the government for efficiency reasons.

Australia’s mobile operators are in the process of sending batches of text messages to millions of Australians on the government’s behalf to warn them about the coronavirus.

The federal government announced the large-scale outreach on Twitter this morning and provided an example text.

The messages do not come addressed from a government sender, but instead from the telco that distributed the text.

This means some users found the text message was grouped on their handset with other less-critical messages sent by their carrier, such as maintenance and upgrade notifications.

iTnews understands that telcos may have had as little as 24 hours notice of the need to distribute the messages, meaning they used their own systems to do so.

While the government does have an official emergency alert mechanism available to it that would have shown messages coming directly from it instead of from telcos, it is understood this was not used for several possible reasons.

iTnews understands that while the government looked into several delivery options, the telcos were ultimately seen as the fastest way to get the message out to Australian citizens.

Another possible reason for not using emergency alert that was raised independently with iTnews is that different levels of government disagreed on the message's wording, again making it easier to run the send outside of the official emergency alert mechanism.

The messages are being distributed both to on-net users as well as to the customer bases of mobile virtual network operators (MVNOs) that make use of the same network.

It’s understood that due to the large number of messages being distributed that they are being sent in batches, hence why some mobile users have received them and others haven’t.