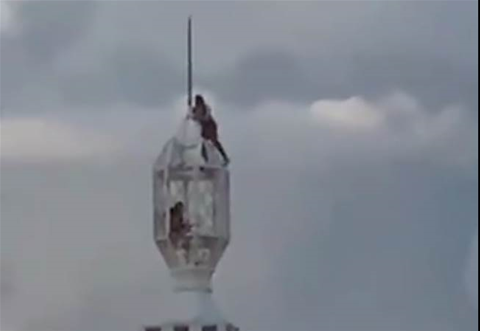 Two teenagers were taken into NSW Police custody on Monday evening after scaling the AWA radiocommunications tower in Sydney CBD.

Video captured by Twitter user Pedro Cuccovillo showed the pair in the spire structure of the tower, which sits atop the AWA Building on Erskine Street.

The tower and building take their name from AWA, “a household name from the 1930s to the 1950s as both a broadcaster and a manufacturer of radios, record players and other electrical equipment,'' according to the Heritage Council of NSW.

A NSW Police spokesperson told iTnews that police received reports about the incident at about 5pm on Monday.

Police Rescue was called in to “retrieve” the two teenagers from the AWA Building rooftop, at which point they were placed into custody.

The teenagers were assisting NSW Police with their inquiries at the time of publication.

The AWA Building and Tower is an iconic part of the Sydney skyline, and was the tallest structure in the city until 1958.

“For many years the tower wore the sign 'Beam Wireless', a service providing radio contact to commercial shipping on the England-Australia route introduced in 1927,” the Heritage Council of NSW said.

The tower later carried AWA signage but that has also since been removed.