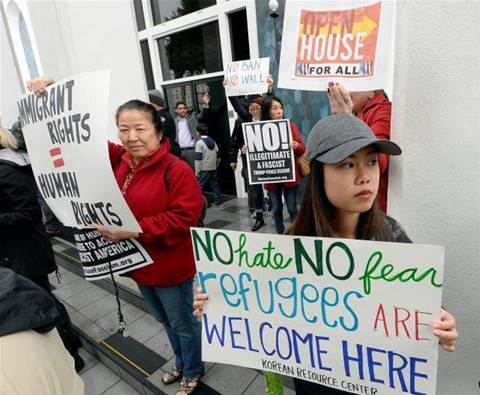 Nearly 100 companies, including some of high-tech's biggest names, joined a legal brief opposing President Donald Trump's temporary travel ban, arguing that it would give companies incentives to move jobs outside the United States.

The companies - including Apple, Google and Microsoft - banded together late on Sunday to file a "friend-of-the-court" brief with the 9th United States Circuit Court of Appeals in San Francisco, arguing that the ban "inflicts significant harm on American business".

Trump's 27 January executive order temporarily barred entry into the United States by people from seven Muslim-majority nations. It also suspended the US refugee program, sparking protests and chaos at American and overseas airports.

On Friday, a federal judge in Seattle temporarily blocked the order. The Trump administration had a deadline on Monday to justify its action at the appeals court.

Pending the next ruling in the case, the travel ban remained suspended, and people with valid visas who had been blocked from travel were being allowed to board planes. Refugee resettlement also resumed.

The companies, backing a lawsuit brought against the ban by Washington state, argued that Trump's order created uncertainty for companies depending on talent from overseas and global business travel to innovate and create jobs in the United States.

"Highly skilled immigrants will be more interested in working abroad, in places where they and their colleagues can travel freely and with assurance that their immigration status will not suddenly be revoked," the brief said.

"Multinational companies will have strong incentives ... to base operations outside the United States or to move or hire employees and make investments abroad."

"Ultimately, American workers and the economy will suffer as a result," the companies argued.

Facebook, Twitter, Intel, eBay, Netflix, and Uber joined the brief, as well as non-tech companies such as Levi Strauss and Chobani.

No other companies on the council, assembled during the transition leading up to Trump's January 20 inauguration, signed on to the "friend-of-the-court" brief.

The tech companies, which employ many foreign-born nationals, have been among the most vocal groups speaking out against the travel order, which Trump has defended as necessary to ensure tougher vetting of people coming into the country and better protect the nation from the threat of terror attacks.

In its response to the lawsuit, the government argued in legal filings that the president was exercising his constitutional authority to control US borders and that the law allows him to suspend the entry of any class of foreigners who "would be detrimental to the interests of the United States." The Department of Justice declined to comment beyond the filed court papers.

The government had until Monday afternoon to submit additional legal briefs to the appeals court in support of the executive order.

Following that, the court was expected to act quickly. A decision either way may ultimately result in the case reaching the US Supreme Court.

The brief filed by the companies hailed the contributions inclusive immigration policies have made to the American economy.

It claimed that immigrants or their children have founded more than 200 of the companies on the Fortune 500 list. In addition to some of the companies filing the brief, the attorneys pointed to companies such as Kraft, Ford, General Electric, AT&T, McDonald’s, Boeing, and Walt Disney.

"Collectively, these companies generate annual revenue of US$4.2 trillion, and employ millions of Americans," the brief said.

Susan Cohen an attorney at Mintz Levin in Boston who represents big companies in immigration matters, including global information company and Reuters parent Thomson Reuters, said lawyers were advising clients to get to the United States as quickly as possible because the current situation allowing travel could change.

She said that businesses were going out of their way to provide the most up-to-date information to their employees as the fast-moving court battle developed.

"Many businesses are extremely upset and confused," Cohen said.