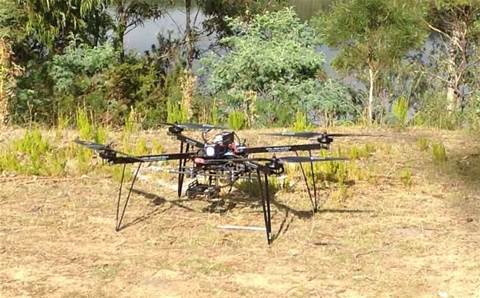 The UAVs were deployed during the initial design and investigation phase of the project, ahead of wall strengthening work and an impermeable membrane being attached to the upstream face of the dam planned for 2016 to 2017.

Overseeing the UAVs is TasWater project director Fraser White, who told iTnews the aim was to “collect a lot of data” ahead of construction works to extend the productive life of the historic water storage facility.

“The dam is about 100 years old, approaching the end of its design life, and TasWater would like to extend the life of the dam by another 100 years,” White said.

According to White, the project involves the services of both a commercial UAV operator as well as cloud-based mapping and surveying platform Propeller Aerobotics.

“The drones we used were from a company called Aerial Vision Australia in Hobart. They collected visual and survey information, then passed it on to Propeller Aerobotics, who gave us the data we were after,” he said.

“There’s not a lot of drone activity in TasWater at the moment. For this project we took the opportunity to gather spatial information and to trial emerging drone technology, [using] two drones for the work. One drone was for high-quality photography to assess the condition of the dam.

“There was also a larger drone to survey the topography, and that drone is pre-programmed to go over a predetermined route. Instead of being set up to take images based on a timer, it takes them based on geography so they overlap, and you end up with a 3D map."

In terms of budgetary impact, White said the use of UAVs compared favourably to more traditional surveying methods.

“It’s extremely cost-effective. Rather than have people on boats or climbing up walls, what we can do is have a drone traverse the full-length of the dam, when it’s not underwater. When we did the face [of the dam], it was the vertical face,” White said.

“We wanted to get survey information and trial drone technology to see what it could do for us – to get some good engineering info, and also good promotional information.

“If you want to go into a standard survey of the area, it would take at least three days for a surveying crew of two to get topographic data.”

While this project focused on collecting photographic imagery, White said he hopes to use the remote-sensing LiDAR technology on future projects.

“The big issues were the availability of the drone and having a good day for it to work – so not too windy. Both Propeller Aero and Aerial Vision were good to work with, and didn’t leave anything to chance,” he said.

“The technology is advancing rapidly. It’s probably not cutting-edge, but still it’s not widely used in Australia. I certainly could see it in more applications. The drone company we used are looking at different sensors for different applications.

“We’re basing our data collection on the photography (in the not-too-distant future it is likely the drones will be equipped with LiDAR technology), and that photography is sent to Propeller to prepare the survey information. From that, we have 3D model that feeds into our terrain data.”

The TasWater deployment follows trials by the agency’s Victorian counterpart, Melbourne Water, which used the technology for civil infrastructure inspections.

The South Australian government is also preparing to trial the use of UAVs as part of a strategy aimed at reducing the impact of wild dogs and other pests in agricultural areas.