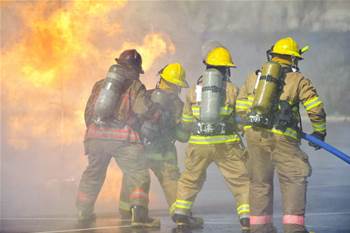 Tasmania's emergency services agencies are stuck at an impasse in their efforts to streamline radio communications, meaning frontline staff remain unable to effectively talk to one another across networks, the state's Auditor-General has found.

In a report released yesterday [pdf], auditor Mike Blake revealed that despite the state government’s efforts to resolve problems with the current system by introducing a whole-of-government radio network, the project had only so far achieved an upgrade to the existing Tasmania Police radio network.

The Tasmanian police, SES, ambulance and firefighters have been in discussions for the past eight years about fixing and standardising the state's emergency services networks.

The agencies currently use radio communications in the 800 MHz and 70 MHz frequency bands.

The Tasmanian Police moved to the 800 MHz band in 1996, but all other emergency services bodies use the 70 MHz band, which provides better coverage in rural and hilly areas, compared to the urban benefits 800 MHz offers.

While the audit report found no issue with the reliability of the networks, it did find they were not fully effective for a range of security, interoperability, duplication and cost reasons.

For example, the Tasmanian Police currently lodges dispatch calls using analogue transmission - meaning outside parties can scan the majority of the unencrypted communications - despite the fact they have a restricted digital transmission capability which tends only to be used for covert and special operations

In contrast, the state’s fire service only has a non-encrypted analogue network, as security and confidentialty requirements only come up on limited occasions, such as fire-related fatalities.

Forestry Tasmania has previously used scramblers to stop conservationists monitoring its transmissions, while both Ambulance Victoria and the SES signalled preferences to move from their 70 MHZ analogue networks into a secure environment.

Despite a 2009 COAG recommendation that Australia’s emergency service networks develop interoperability, the audit office found only the ambulance and SES 70 MHz networks are able to properly communicate with each other.

The 800 MHz police network has no direct interoperability with the other networks.

As an interim measure, Tasmania Police had purchased a number of 70MHz radios to partially overcome the lack of communication, the report revealed.

The issue of interoperability is an ongoing concern for the state, and was highlighted in a report into the 2013 Tasmanian bushfires.

The government has attempted to address the issue with a long-running proposal for a whole-of-government network. But the audit office found no real progress has been made against its objectives in the eight years since its inception.

“There were fundamental problems with the defined objectives and structure of the WoG project. Unless they are resolved, the project has little prospect of success," Blake said in the report.

The Auditor-General backed the initial project's recommendation of a WoG network operating in the 400 MHz range, which he admitted would reduce coverage for the agencies on the 70 MHz networks, but said would improve coverage for Tasmania Police, which operates on the 800 MHz range.

He also suggested using the 160 MHz frequency, which he said had better coverage than 400 MHz but was less effective within buildings.

The initial proposal put forward for the WoG network offered three options: a single 400 MHZ network, a dual band 400 MHz/160 MHz network, or a 400 MHz network which would retain the existing 70 MHZ analogue network but which would be interoperable.

The option for a single 400 MHz network was the most favoured - despite posing challenges with more sites needed in remote areas - but the project stalled after agreement on a deployment strategy failed to be reached between the emergency services agencies.

Additionally, the Tasmania Fire Service and Forestry and Parks were against moving to the 400 MHz frequency, signalling a preference to keep the existing 70 MHz analogue network before eventually moving to a 160MHz digital network, the report stated.

The project was revived in 2012 with the same options, and the same preference for a 400 MHZ digital network. It received funding from Treasury in 2012, but as at November last year an implementation plan had not yet been approved and little progress had been made.

The Tasmanian Fire Service and Forestry and Parks remain opposed to the recommended 400 MHz option.

But despite their opposition, the steering committee overseeing the project still expected a committment from the relevant agencies for the 400 MHz network, according to the report.

“The 2012 restart had yet to obtain stakeholder support and consensus appeared unlikely or difficult in the foreseeable future," Blake said in the report.

He advised the state’s emergency services agencies to focus on improving interoperability while awaiting the outcome of the WoG network project.

Blake also suggested the Tasmanian government consider establishing a new body, separate to the steering committee, to implement and operate a WoG network if the lack of progress continued.