Tabcorp IT overhaul jackpots with 73 percent growth in digital lotteries 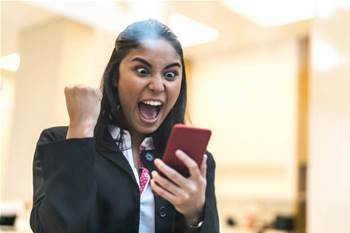 A big IT infrastructure uplift at gambling shop Tabcorp has paid out big returns early, with the owner of the iconic Powerball, OzLotto, TattsLotto and TAB brands hitting the jackpot with a whopping 73 percent rise in digital lottery turnover.

The ASX-listed gambling provider, which returns the bulk of its revenue back to state governments, on Wednesday chalked-up an 8.7 percent rise in revenue for the 12 months to June 30 to $5.5 billion, with underlying earnings romping home at 42.5 per cent to $397.6 million.

And it seems we love to fantasise about winning 'the big one' on our mobiles even more than on paper.

The digitisation of Tabcorp's lotteries division proved the standout earner, with a major innovation push, including a system redesign “to deliver bigger and more frequent jackpots and more winners overall,” spurring the purchase of digital and retail tickets.

Increased customer interaction, namely the option of receiving secure alerts to devices on winnings and results, has proved a particularly big hit, as has the ability for consumers to chase big jackpots across lottery brands via mobile via cross sell options.

However, Tabcorp is also hedging its big switch to digital by ploughing a sizeable chunk of the uplift into its retail partners through a new remuneration model, clearly aware Lotteries are one of the last remaining lifelines for newsagents.

The digital push includes a mobile wallet with account holders now able to spend Lottery winnings in-store. That paid-off big for retailers too, with Tabcorp’s retail earnings up 17 percent for the year.

“We also benefitted from a particularly lucky jackpot run for Lucky Lotteries and OzLotto which added circa $30 million in incremental EBIT.”

The big payday for lottery digitisation was book-ended by major operational efficiency gains and cost savings delivered by Tabcorp’s replatforming that is essentially centred around building a single new architecture that can span across its brands and divisions and deliver far greater clarity in terms of customer and operational data.

The essence of the uplift, which stems from Tabcorp combining lotteries, wagering and media and gaming services via a series of acquisitions, is to provide a multi-business transactional and data analytics capability that can be extended to mobiles and apps as required.

The consolidation, Attenborough said, is coming together either on time or ahead of schedule.

“For the full year we delivered $64 million in EBITDA from synergies and business improvement of which $57 million was [reduced] cost,” Attenborough said.

Around 60 percent of those numbers benefitted the wagering and media business, where cost pressures and operating overheads are ripe for reduction through better data, tech and infrastructure execution and legacy replacement.

Because gambling is essentially business built on a series of transactions made on data flows derived from occurrences of chance or skill, the replacement of multiple legacy platforms and the application of modern data architecture and modelling often pays off bigger than in other industries.

Attenborough revealed there will be no relent in Tabcorp’s big tech overhaul, especially around wagering and media where the company has aggressive local and international competitors seeking to grab its market share with snazzy new punting apps and promotional offers.

Tabcorp’s results reveal that over the 2019 financial year it consolidated the trading platforms between its Tab brand and acquisition UBET as well as call centres and race day control, in addition to overhauling its risk and compliance framework, an area that this year has cost banks billions.

The coming year will see the data integration of the wagering business overhaul come out of the gate with “UBET systems fully migrated to TAB platform in 2H20 and full offering aligned with TAB” the latest milestone list says.

That will flow not only into mobile, but also retail via Tab’s dedicated shops and presence in venues and race courses where the systems and hardware are set for a refresh.

Attenborough told investors the key to this was building a single data lake for as the UBET and Tab brands come together to the business had the full picture of both customer sets, with a “large project running now that’s had some drops” with the data lake being “the endgame.”

“There’s a huge amount of effort going into this,” Attenborough said.