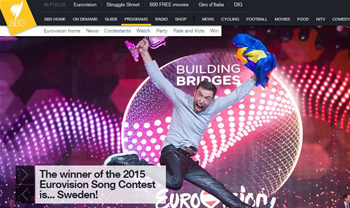 A number of Australian fans of the Eurovision song contest were unable to vote for their favourite entry on Sunday after the official televoting system went haywire.

As part of the 60th anniversary of the annual Eurovision gala this year, Australia was offered a spot in the competition and the country's citizens were given the chance to vote in the final for the first time.

But many fans who got up to watch the 5am live broadcast on Sunday were unable to cast their vote.

A number of those attempting to register their vote either received error messages informing them voting had closed, or were told the service was unavailable.

Public votes account for 50 percent of each country's final vote. A judging panel makes up the other half.

SBS confirmed the issue with the televoting system, which was provided by service provider MNET.

SBS was directed to use the MNET platform by the European Broadcasting Union, the broadcaster said. The system aggregated phone and text votes for the contest.

"MNET were engaged by the EBU's mobile operator, Digame, who are based in Europe. Digame oversaw the televoting solution for all participating countries," SBS said in a statement.

"MNET is investigating this issue with Digame."

SBS said given the difference in time zones between itself and Digame's European headquarters, it expected to be able to provide further details tomorrow morning.

It did not disclose how many Australian votes went uncounted.